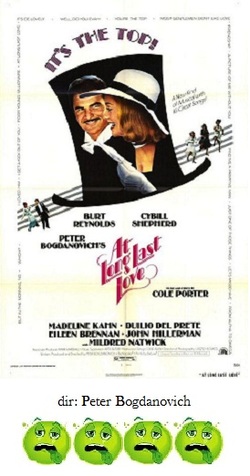 It's movies like At Long Last Love that turn the phrase "a good old-fashioned time at the movies" into an insult.  Here's a musical with as much substance as a rice cake that's filled with actors who can neither sing nor dance.

The once great Peter Bogdanovich decided to create a throwback to the golden age of Hollywood musicals, but he didn't understand two things: (1) Not all of those movies were good, and (2) The good ones were good movies first and good musicals second.  Bogdanovich just gathered a bunch of Cole Porter tunes, rearranged them into some sort of structure and then built a screenplay around them.  Or, at least, it feels that way.

What plot there is consists of couples Cybill Shepherd and Burt Reynolds and Madeline Kahn and Duilio Del Preete falling in love and then they change partners and then change back again and finding out who their true loves really are.  A side romance between Shepherd's maid, Eileen Brennan, and Reynolds's chauffeur is also tossed in for good measure.

So, where does the music fit in?  Well, it doesn't.  Every few scenes the movie stops dead and a random Porter tune is trotted out.  There are some very tenuous connections between the songs and the current plot points, but mostly they serve only as showcases for the cast members.

Which brings us to the real problem with At Long Last Love, the cast.  If you were given the task of coming up with the least appropriate cast for a big budget musical, you still couldn't come up with one worse than this.  The bulk of the performances are handed off to Shepherd and she sucks all the life right out of them.  But even the singing is more accomplished than the dancing which consists of the actors clomping around and failing to keep any sense of time with the music, all of which makes these stars look like a group of 4 year-olds trying to perform 'Swan Lake'.

At Long Last Love sent Peter Bogdanovich's career into a death spiral that it never got out of.  With the exception of Mask in 1985, he has helmed one turkey after another (They All Laughed, Noises Off, Nickelodeon, The Thing Called Love, etc.).  So, if you're really looking for "a good old-fashioned time at the movies" stick with the real thing and avoid miscalculated clones like this.