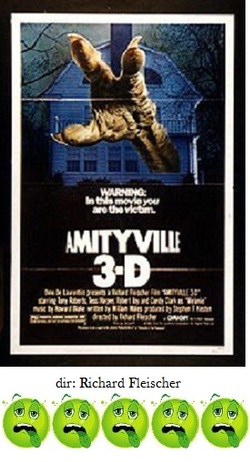 Whether or not you believe that the events presented in The Amityville Horror (1979) and Amityville II: The Possession (1982) ever  truly happened, you won't have to worry about that with Amityville 3-D because the whole film makes no claims to be anything other than a total fabrication.  But is it any good?  No.  Amityville 3-D lacks scares and coherence and it all looks stunningly cheap.

The movie stars Tony Roberts as an investigative reporter who specializes in debunking mediums and the paranormal, and after an investigation into the infamous Amityville house, decides to just, you know, buy it and move on in.  Bad idea.  No sooner has the ink dried on the deed than weird things start happening.  First, the realtor is found dead inside after a protracted scene where he is attacked by hordes of flies, which, by the way, are the most hilariously phony looking flies in all of film.  I guess they had to make them look that way in order for the 3-D to seem more vivid.

Anyway, Roberts, naturally, doesn't believe anything strange is going on...ever.  Strange apparition?  Just the wind.  Weird noises?  Just the house settling.  The abyss to Hell in the basement?  Phhht.  Even after the mysterious deaths of both his daughter, Lori Loughlin (off-screen boating accident), and his colleague, Candy Clark (burned alive in her car), Roberts is still unconvinced.  It's just a house after all.

It isn't until Roberts's ex-wife Tess Harper brings along paranormal scientist Robert Joy to investigate does Roberts begin to admit, maybe, there's something strange happening.  Of course, this doesn't happen until the spirit of Loughlin leads the crew down to the Hell well and a foam-rubber demon leaps out of it.  Afterwards, the house goes ballistic and scientists are killed; there are house-quakes, an indoor snowstorm, flying furniture, and, most menacing of all, a malevolent, stuffed swordfish.

The whole of Amityville 3-D is a shambles.  As stated before, the makeup and special effects are disastrous.  At least when wearing the 3-D glasses, one is more concerned with how effective all of the stuff hurled at the screen is, or in most cases, the 3-D is so cloudy-looking the messy effects aren't as noticeable.  But when viewing it in 2-D all of the flaws and shoddy production values are all the more clear.  The acting by the cast isn't all that great, either.  Roberts is typically bland, Harper, Joy and Clark all overact to the rafters and Loughlin all but disappears.  Of special note is the appearance of a young Meg Ryan, in one of her very first film roles, who stars as Loughlin's gal pal who talks her into performing séances in the house and going on that ill-fated boat ride.

So, there's none of The Amityville Horror's underlying menace, and none of Amityville II: The Possession's style and atmosphere.  Amityville 3-D is flat, uninvolving, laughable, and cheesy: all things that a good horror movie shouldn't be.  With or without 3-D.