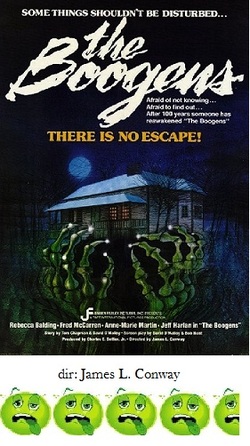 The movie is full of bad acting, cliched characters, non-suspense, and some of the goofiest and laughable creatures to come down the pike. But I'll get to them a little later on. The characters are completely one-dimensional. I'll just call them Our Hero, Our Heroine, Guy Pal, Gal Pal, Miner 1, Miner 2, Old Coot, Dead-Meat Girl and Obnoxious Dog.

The story takes place in Silver City. There was once a booming silver mine, but after a cave-in that resulted in several mysterious deaths in the early 1900s, it was closed. Jump to 1981, and Our Hero, Guy Pal and Miners 1 and 2 are trying to reopen the mine using explosives, whereupon they discover an underground pond littered with human remains. What could have happened? Why, it was the Boogens!!!

You see, Our Hero and Guy Pal are about to rent a house, so Dead-Meat Girl opens the house the night before they are to arrive. Now we get the obligatory scenes of Dead-Meat Girl wandering through the basement, hearing strange noises. Until (finally), when she reaches the top of the basement steps, apparently out of danger, a tentacle snags her leg and drags her back down.

The next day, Our Hero and Guy Pal meet up with Our Heroine, Girl Pal and Obnoxious Dog at the house. After some sex, various characters hear some strange noises and go wandering around the basement. Our Hero and Guy Pal find a mine shaft in the wall. Yes, they find a giant, boarded-up hole in the wall that apparently goes straight down to the mines below.....yeah....right. Just what every home needs, a thousand foot abyss.  Guy Pal wanders around the garage and gets slashed up by another mysterious tentacle, Obnoxious Dog sets sucked down a heating vent, Girl Pal gets slashed in the pantry etc. etc. etc. Meanwhile, down in the mines, Old Coot, who is the grandson of one of the-turn-of-the-century trapped miners, threatens to blow it up along with Miners 1 and 2, exclaiming "Boogens! Boogens!". Miner 1 and Old Coot get boogenized before anything can happen, so Miner 2 goes to the house to help Our Hero and Our Heroine.

The final, still-living characters are immediately attacked and we finally, FINALLY get a glimpse of these heinous creatures. Prepare for jaws to drop! The boogens look like flat, glazed, styrofoam hand puppets with teeth, tentacles and golf ball eyes...seriously, they resemble Kermit the Frog after a cocaine bender. During the earlier attacks in the film, the camera becomes the point-of-view of the boogens as they zip around the house at amazing speed searching for their prey. After they appear on camera, though,  they can barely twitch or move...obviously they are being manipulated by a guy off camera who didn't have very good control over his puppetry.

Anyway, Miner 2 is slashed, so Our Hero and Our Heroine make their way through the mine, fending off boogen attacks until they are able to blow it up with some convenient dynamite left behind by Old Coot. The mine collapses. The town is saved. And we are spared a sequel.

For a 90 minute creature feature nothing much happens in The Boogens, and when something does happen you just wish it would stop. It's very slow going through this laughably unscary piece of cheese whiz.  Movies like The Boogens are what fast-forward buttons were designed for.