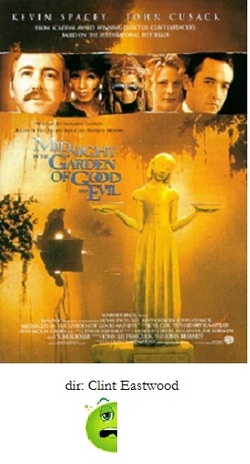 It's difficult to pin-point the exact reason why Clint Eastwood's filmed adaptation of the bestseller Midnight in the Garden of Good and Evil is so disappointing. Eastwood's direction is adequate and fluid, the performances by the cast are quite endearing, and the wonderful photography of Savannah, Georgia is nearly perfect.

So what's the problem? This adaptation of John Berendt's popular novel contains all the proper parts, but can't quite put it into an entertaining machine.

John Cusack stars as the author himself who, on a magazine assignment, is brought into the world of Savannah's wealthy to cover a famous Christmas party given by local playboy Jim Williams, played by Kevin Spacey. One evening Williams is arrested for the murder of his lover (Jude Law). Was it self defense?

The film pretty much covers the trial, but only as a secondary plot element even though gobs of screen time is devoted to it. The screenplay just can't seem to keep it's focus away from the local colorful characters, including a man who walks and invisible dog, another one who ties horseflies to his suit and carries a bottle of poison, and a pre-op transexual known as "The Lady Chablis" (incidently played by herself).

In reality the murder went to three trials, all ending in hung juries. The film crams all of them into just one and shows a different outcome.

Clocking in at 155 minutes, Midnight in the Garden of Good and Evil lumbers along, going through the motions but completely lacking any passion for its subject. The viewer begins to care less and less about the outcome.

Eastwood has given us a great looking film. But one that is completely uninvolving.