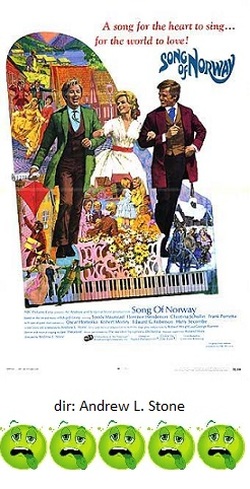 In Hollywood, timing is everything.  Case in point: Song of Norway, a bloated, costume-heavy, historical musical cut from the same cloth as The Sound of Music, a better movie this one desperately is trying to mimic.  By 1970, audiences had moved on to more edgy fare such as Easy Rider and Midnight Cowboy and no longer had need of dull, numbingly-sweet musicals more fitting for little old ladies out for a matinee.  But Song of Norway is so lame that even if it had been released in the early '60s it still would have sunk like a stone.

Based on a stage musical, Song of Norway tells the early life story of Norway's greatest composer, Edvard Grieg, and the first question the film makers should've asked themselves is: Even if it works, will anyone care?  Toralv Maurstad stars as Grieg and here we come to the film's biggest problem: Maurstad is so bland, so flat, so without charisma, that the movie is practically dead in the water right from the beginning.  We as the audience don't care about following this guy's career and it doesn't matter if the Norwegians will ever embrace his music (of course they do, eventually).

Anyway, the first act of the film deals with Maurstad's infatuation with wealthy heiress Christina Schollin much to the consternation of her father Robert Morley.  In a deal with Morley in order to salvage Maurstad's reputation, Schollin leaves him which sends Maurstad to Europe where he befriends Frank Poretta who stars as the man who "wrote Norway's national anthem."


Maurstad and Poretta then meet up with a cousin, Florence Henderson (TV's Mrs. Brady of The Brady Bunch).  Maurstad and Henderson fall in love and get married, and the three gallivant all over the place and we wait for something to happen.  But nothing ever does.  Everyone hopes for Maurstad's Grieg to finally become appreciated and famous and we simply watch and wonder when it will happen.  Periodically, Maurstad traipses to various locales and meets up with such famous individuals as Henrik Ibsen, Hans Christian Andersen, and Franz Liszt and we get one limp scene after another that simply has Maurstad sitting around without anything interesting to say or do; the character doesn't even contribute to his own story it seems.  The biggest bit of plot tension in the whole film revolves around the fact that both Henderson and Schollin, without being aware of it, have decided to buy Maurstad pianos.

Since neither the characters nor the screenplay can provide any interest, how are the musical numbers?  Well, they are pretty terrible, too.  Henderson's first scene has her singing a sickeningly-sweet tune to a bunch of children as they all dance around their small town in what is the single most annoying rip-off of The Sound of Music in a movie filled with them.  Poretta has the dishonor of singing the title tune which turns out to be the worst of the lot (yes, we get lots of lyrics dealing with fjords), and there are endless time-fillers where various townspeople gather around to do some folk dancing in the snow.  The dancing is also pretty weak, Maurstad and Poretta aren't too bad but it's pretty amusing watching Henderson try (and fail) to keep up with them; a dancer she is not.

Anyone who can slog through Song of Norway without passing out due to boredom or sugar-coma deserves some sort of medal.  The songs stink (a sweet love song Maurstad sings to Schollin in the film's beginning is the sole bright spot), the dance numbers are laughable, the leading man is embalmed, the story is trite, the screenplay is empty, and the photography of so many lush mountains, babbling brooks, and snow-covered fields becomes its own drinking game.  The film was an expensive flop and it deserved to be.