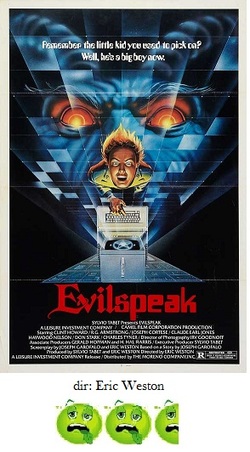 Which is the biggest mistake in Evilspeak?  Trying to combine the satanic possession angle of The Exorcist with the nerd-teen revenge story arc of Carrie, or actually casting Clint Howard to star in it?  Or both?

Clint Howard, as you may know, is Ron Howard's (much) less talented brother who has since made a career out of doing cameos in Ron's films. In Evilspeak, he gets the starring role, and boy is it a case of miscasting.  First off, the guy looks about 10-20 years too old for this role, and aside from that, his acting is just bad. Real bad. He sleepwalks through the movie and always has an expression on his face that is reminiscent of someone with especially painful gas. And by the end, with his eyes bugging out and his hair standing on end and swinging a broadsword, which looks like it's too heavy to lift, it was difficult stifling the giggles.

Howard stars as the awkwardly named Stanley Coopersmith, a high-school student at an exclusive military school. Coopersmith, as he is called repeatedly ad nauseam throughout the movie...try saying it three times fast, is an orphaned charity case who is constantly picked on, bullied, and beaten by his fellow students, led by the richest and bulliest of them all....Bubba! Yes, Bubba is his name.

The school, you see, was originally founded by a man named Esteban, who was persecuted by the Inquisition for being a devil-worshipper- although no one in the movie seems to know that. While cleaning out the basement of the sanctuary, Coopersmith finds one of Esteban's evil tomes. So he decides to build an altar and perform a black mass to bring Esteban to life so he can take revenge on his evil classmates.

Doesn't sound too silly does it? But it gets worse. Since Coopersmith used his computer to download and interpret the Latin passages of the book, it appears that Esteban's spirit or something is trapped inside the computer. Every time Coopersmith gets angry at someone, the computer roars to life and weird phrases and demonic symbols start appearing.
After Bubba and the baddies finally go too far and slaughter Coopersmith's puppy, Coopersmith finally becomes possessed by Esteban and unleashes all the evil, causing the sanctuary to burn while people perish.  There is much lopping off of heads with the ancient broadsword...and, oh yeah, almost forgot, he even brings forth a herd of pigs to chomp away at helpless victims.

Yes, that's right. Evilspeak is the only movie I know of that uses garden-variety farm pigs as instruments of terror. But there ya go.  After the silly finale is over and everyone is dead, the end title card reads that, after the great tragedy, Coopersmith was whisked away to an asylum where he remains to this day.

Evilspeak tries hard to cobble the familiar into something different, but it ultimately falls flat.  And remember...beware of the pigs!