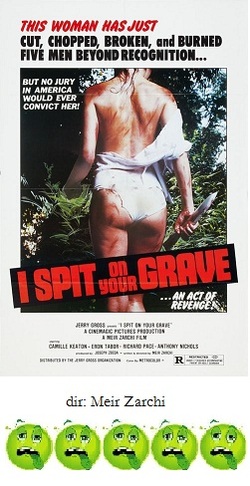 It's very difficult to know what to think about the notorious I Spit on Your Grave. On one hand it is exactly what it's reputation has made it- a reprehensible, vile, exploitive geekshow; however, on the other hand, it could simply be seen as a somewhat amateurish and misguided attempt as a pro-feminist revenge-fantasy film. Either way you look at it though, it is seriously nasty business.

Written and directed by Meir Zarchi, I Spit on Your Grave is the tale of a female writer, played by the grand-neice of Buster Keaton, Camille Keaton, who rents a house in the woods in order to write a novel. One day, while sunning herself in a canoe on the river, she is attacked by two men in a speedboat who drag her canoe to shore, and along with two other men, proceed to assault and rape her. After the attack, she treks naked and bleeding through the woods and is preyed upon by them again, this time they stretch her across a boulder and rape and beat her again. Later as she stumbles and crawls back to her house, they are waiting for her and they brutalize and rape her yet again.

Sounds fun so far doesn't it? With the bare minimum of dialogue and character development, the viewer is subjected to endless brutalization of Keaton. I'm not sure what is more embarrasing, watching the actual rapes themselves or the lengthy shots of her naked and stumbling through the woods crying and bleeding.

Anyway, several weeks pass as Keaton heals and mends, and then she decides to turn the tables on her attackers. She lures one out to the woods for sex, while he's on top of her she wraps a noose around his neck and strangles him while he dangles from a tree. Next she lures another back to her home, and while they take a bath together she cuts his penis off with a knife and then locks the bathroom door behind her while he screams and bleeds to death. She uses an axe to dispatch the third and disembowels the fourth with the outboard motor on her boat. The end.  As you can tell by my point by point analysis, she kills only four men, which means the original poster and advertisement campaign contains one of the biggest mistakes when it claims, "This woman has just cut, chopped, broken and burned five men beyond recognition."  Not that it really matters.

I Spit on Your Grave is essentially, a vomitorium of exploitation, seemingly only existing to show depraved violence and brutality. But is it really as bad as it's reputation has made it out to be? Almost. Keaton's performance is quite good, and she does show real strength in what little she is given to do. The audience does feel real suffering for her character and satisfaction at her revenge. After all, they do deserve what they get. There are instances where you can tell what Zarchi was trying to do, to try and give the genre a pro-feminist edge; however, his complete lack of directing skill and his amateurish writing sink whatever underlying theme he was attempting to get at. The disgusting nature of the material and it's vivid depiction are just a turn-off.

Not for the timid or the meek. I Spit on Your Grave demands a strong constitution to sit through...and then a nice hot bath afterwards.