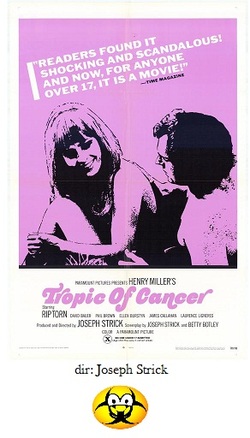 Don't be tempted by the naughty sex films of the 70's, even if it's for a cheap thrill. Movies such as The Story of O or I Am Curious (Yellow) just don't titilate anymore (and really, did they ever?), they either leave you screaming with laughter or fighting impending unconsciousness.  Tropic of Cancer, unfortunately fits into the second category.

Based on the controversial Henry Miller novel, Tropic of Cancer stars Rip Torn as a struggling American writer in Paris (named Henry, natch). Anyway, at the film's beginning Torn is having a splendid time with his wife Ellen Burstyn, who spends her ten minutes of sceen time naked. Burstyn gets pissed that Torn is broke, and that the bed in their hotel room is full of bugs, so she splits.  The rest of the movie has Torn moving from hovel to hovel, sometimes crashing on the couches of various strangers. That's all for plot. Fascinating isn't it?

Because this movie is rated NC-17 (in 1970 it was given an X rating) you'd expect a little more in the sex department, but you'd be very disappointed. A few naked French girls are shown, but whatever. Mostly the characters have lengthy, deep, discussions about sex.  Mostly this is just boring, but at times, Torn's voice-overs on the subject are just hysterical. He talks ad nauseum about penises and vaginas and what he likes to do: "I want to chew on her clitoris and spit out francs."

The single funniest scene is the attempted bedding of a princess by one of Torn's friends. She is very willing but says "I have the clap. It's just a little gonorrhea", the guy, of course, recoils in surprise and disgust, her retort of "Oh, you Americans!" makes one wonder how wanting to avoid a veneral disease is an American cultural phenomenon. Who cares?

Torn at one point gets a brief teaching job where his lectures mainly consist of the penis sizes of various animals, "The whale's penis is 2 meters long, and actually contains bone!"  The film ends, as it must, with Torn, still broke, but enlightened, riding through the streets of Paris in a cab. Pointless in the extreme.

Tropic of Cancer is probably the longest 87 minute movie ever (it's really a close tie with the 88 minute Friday the 13th Pt.8: Jason Takes Manhattan for creating the perception of some kind of time warp where every minute in real-time it stretched into an eternity). I wish producers would realize that just because it works on the page, that doesn't mean it will translate into anything anybody would ever want to see.