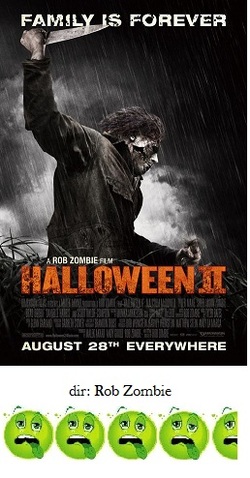 I'm not exactly a huge fan of Rob Zombie's directorial efforts.  But when even his rabid fans, you know, the ones who actually can find good things to say about his ghastly and unwatchable House of 1000 Corpses or the kinda scummy The Devil's Rejects, resoundingly proclaim how much they hate Halloween II, you have to believe there may be something in that.

When Zombie released his Halloween remake in 2007, I wasn't exactly expecting anything good.  But I grudgingly admit that he did a pretty good job in reinventing and rebooting the series of films detailing the murderous exploits of iconic slasher Michael Myers (and after the completely dreadful 2002 sequel Halloween: Resurrection, I thought that would be it, or at least I hoped so).  It wasn't perfect, but at least it felt like a fresh approach, and as the rules of Hollywood always dictate, any financial success should beget a sequel.  That sequel, Halloween II, was coughed up, and instantly ranked as one of the worst of them all.

The problems with Halloween II are readily apparent right from the start.  As fans know, the 1981 version of Halloween II followed Myers as he stalked Laurie Strode through a hospital.  We also begin at the hospital this time with returning heroine Scout Taylor-Compton as Strode being chased by Myers, but this entire, lengthy opening set-piece turns out to be just a lame nightmare sequence.  Things don't get much better because there are countless, endless dream sequences with Taylor-Compton screaming herself awake.  Which brings up the next problem, which is the performance of Miss Taylor-Compton.  Now, she did a decent job in Halloween, but for whatever reason, Zombie's script turns her into a bitchy, screechy, shrill annoyance; so much so that you can't understand why every single other character in the movie doesn't just backhand her across the room to get her to JUST SHUT UP!!  She screams, she shrieks, she wails about being Michael Myers's sister...seriously, her histrionics are migraine-inducing.  Also getting a personality transplant is Dr. Loomis, played by Malcolm McDowell, who is now written as an opportunistic, hateful slimeball who's cashing in on the tragedy of Myers's murders in Haddonfield.  So, now we hate him too.

There isn't a plot here at all.  We are just given endless scenes of Taylor-Compton "dealing with her issues" while Myers stomps around and kills random individuals who have absolutely nothing to do with anyone or anything.  The only twist in all of this is the completely useless (and obviously shameless) inclusion of Zombie's wife, Sheri Moon Zombie, reprising her role of Myers's (and Strode's) mother, now a ghost who randomly appears with a child version of Myers and a white horse.  Psychodramatic symbolism just isn't a good fit for the Halloween franchise.  Call me a purist.

The final insult comes in the film's finale, where Myers is unmasked and is revealed as shaggy Tyler Mane.  So, yeah, Myers is essentially now a disgruntled mountain man.  Oh, and he gets shot and dies (whether this is due to another appearance of Sheri Moon Zombie, is debatable)...and so does McDowell...and so does Taylor-Compton.  Oh wait, no, she doesn't die, she's just now committed to the loony-bin...or...wait...is that what happened?

Who cares?  It's blessedly over.  Hopefully, this time, for good.