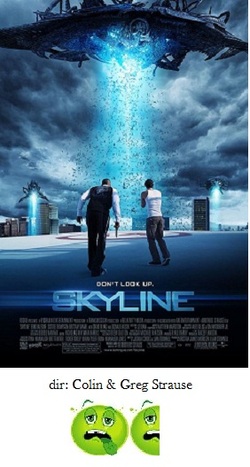 I didn't jump quite as hard on Skyline as most others seemed to.  There are some good things going on here: terrific special effects, a fast pace and a nice atmosphere of unease.  It's just that when Skyline missteps, it missteps in really huge ways.

The biggest detriment is the paper-thin characters which comprise of 'guy' (Eric Balfour), 'best friend' (Donald Faison), 'girlfriend' (Scottie Thompson) and the rest.  Essentially, the only thing you need to know is, 'guy' and 'girlfriend' visit 'best friend' in Los Angeles, alien spaceships appear and begin abducting and feasting on the cast.  That's it.

Skyline gets off to a rocky beginning.  There is an annoying structure to the opening passages where we get a bit of alien menace and then the story backtracks to a couple of days prior and then spends the next fifteen minutes or so getting to back to where it started.  Doing it this way is less than useless.  There's no reason we couldn't have the introduction and then build upon that linearly.  After all, this ain't Pulp Fiction.  But I suppose doing it this way provided a bit of distraction just in case viewers left the theatre upon realizing how flat and obnoxious the dialogue and performances were.

But once the ships arrive and the aliens begin giving chase and causing destruction the movie moves along briskly providing some fun sequences.  The effects are very good and there is a genuine feeling of menace, especially when seeing swirls of people being sucked up en masse into the maws of the ships.  As good as the effects are, the directors Colin and Greg Strause (miles better than their last effort Alien vs. Predator: Requiem) make a colossal error in showing many of what should be show-stopping moments, such as a fight between the ships and a fleet of military jets, through the lens of a telescope that our main characters look through constantly.  Once or twice using this device is okay to break up point-of-view, but Skyline uses so many of these shots that a lot of potential excitement is completely diffused.  The ending moments also don't quite work.  I understand what they were going for, but it still felt awkward and tacked on and unfinished, as if they were totally clueless as to how to end it all.

Skyline isn't a great movie, but it's not a complete waste of time either.  Admittedly, I came to this conclusion after a second viewing and after I had finished watching Battle: Los Angeles, another alien-invasion movie that was released just a couple months after this one.  Compared to Battle: Los Angeles, Skyline keeps looking better and better.