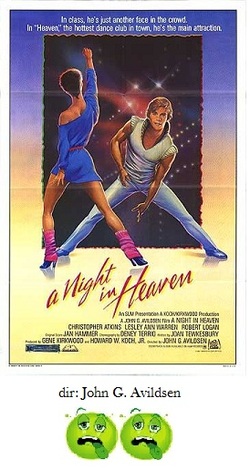 In A Night in Heaven, the evidence of all of the reported production troubles are pretty clear.  It's a shame, really, because here and there you can see glimmers of the film's attempt at potent eroticism, but it all gets lost with a threadbare script and poorly realized characters.

A Night in Heaven stars Lesley Ann Warren as an uptight, college speech teacher; we know she's uptight because she wears glasses and keeps her hair in  a tight bun.  In her class is blonde, talentless bohunk Christopher Atkins (The Blue Lagoon, The Pirate Movie) who may not be doing well in Warren's class but makes a splash as a male stripper known as Ricky the Rocket.

One night, Warren is taken to the strip club by some friends and is aghast when she recognizes Atkins on the dance floor.  He recognizes her, too (even though she is sans glasses and bun), and in the film's one truly great, erotic moment, slowly dances up towards her and leans in for a kiss.  The bit of worldess acting Warren does during this particular moment is excellent, and it sets us up for a scorcher that never comes to pass.  Too bad.  The only sex scene involves a quickie in a hotel room where Warren and Atkins hump briefly after he takes her hand and puts it down the front of his pants.

The rest of the movie is devoted to Warren's conflict, deciding on whether or not to engage in an affair with Atkins or stay true to her husband, Robert Logan.  This conflict would be of interest to us, but since Logan's underwritten character makes him into such a bland, unlikable wet blanket, we hardly care.  Of course, since Atkins's character is also written without any depth, he's simply a dumb piece of meat, we kind of feel bad for Warren that these two dips are her only choices.

How does all of this end up?  In a bizarrely choppy and seemingly unfinished finale, Logan takes Atkins at gunpoint and leaves him naked and crying ("I hear you do your best work naked") in a rowboat in the middle of a lake, and then sits down with Warren at their kitchen table, obviously gearing up for a heart to heart talk that never materializes.  Do they salvage their marriage?  Does Atkins know how to swim?  Does it matter?

Strangely, the great screenwriter Joan Tewkesbury (Nashville) is credited as the writer here, but it feels like the script was cut to ribbons as the movie was being shot.  The characters are thin, the plotting is strictly made-for-TV and except for the moment I mentioned earlier, it lacks heat.  Without Warren's terrific performance, A Night in Heaven wouldn't have a single thing to recommend it.