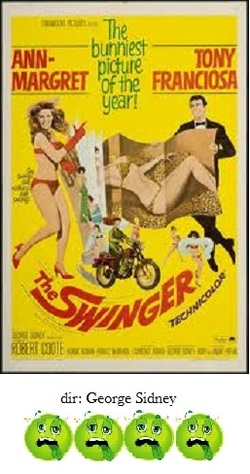 Following the success of Darling, the iconic, swinging 1965 British  hit, American studios rushed their own swinging '60s projects into production.  As shown with The Swinger, the results were almost always abysmal.

An argument could be made that The Swinger, and movies like it, are victims of their era.  The world has moved on beyond where such sexist, misogynistic twaddle would be considered funny and cute, where a woman in the workplace could never be taken seriously and was only useful as the object of lust to be chased around the office by a creepy boss.  At least, I hope so.

Anyway, what is The Swinger about?  Well, pin-up queen of the day Ann-Margret (years before she was taken seriously as an actress and movies like this were the reason why) stars as a young writer who wants her stories published in a national girlie magazine called Girl Lure.  Why Girl Lure?  Who knows.  Magazine publisher Tony Franciosa originally assumes that she is a model and not a writer, of course, then he brushes her off because her stories are not sexual and spicy.  So in order to succeed as a writer, Ann-Margret must pretend to be a sexually promiscuous ho-bag.  Great message, that.  Oh yeah, being that ho-bag is the only way Franciosa shows any interest in her.

What passes for comedy here is having Ann-Margret pretend to be a raging alcoholic and doing such 'daring' things as rolling around in paint and being used as a human paint brush by a couple of muscle-bound guys in gladiator loincloths, and she even claims experience as a prostitute and a stripper.  Franciosa eventually figures out she's a fraud, but likes her anyway, and gets his kicks by having her 're-live' these experiences for an on-location photo spread in the magazine.  Ha ha, see Ann-Margret flail around as a stripper...hee hee, see Ann-Margret get propositioned by prospective johns on a seedy street-corner.  The only truly funny moment occurs when Ann-Margret's parents make a surprise visit and she cries about the terrible things she was forced to do, wailing "I was a stripper and a streetwalker and I was in a motel room and a strange man tried to forcibly seduce me!"  Mom's response?  "You think that's bad, just wait 'til you have children."

The acting by all is amateurish but it pales to the atrocious wall-to-wall music.  In fact, if you can sit through the pre-opening credit song and dance number that Ann-Margret warbles you've won half the battle.  The final insult is the ending which has our prospective lovers dying in a head-on collision only to have the movie suddenly rewind and allow them to live and embrace.  You'll be cheering for the collision.

The Swinger is just a dated relic from a thankfully bygone era and only serves as a kind of archaelogical artifact to be studied and pondered so that nothing like it can ever be allowed to exist again.