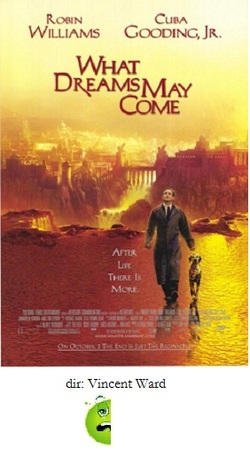 In yet another case of style over substance, the visually stunning but disappointing What Dreams May Come makes another argument for working on the script before working on the special effects. And lay off the shameless waterworks too!

The first half of the movie is actually quite good. Robin Williams and Annabella Sciorra star as a couple who meet in college (they are the most aged looking college students in history, but never mind), get married, have kids and proceed with a basic hunky-dory life. But tragedy strikes, as the kids die in an accident, and even before they can finish mourning, Williams is killed while trying to help a car-wreck victim.

He wakes up in a strange place and is greeted by Cuba Gooding Jr., who is some sort of guide. He's in heaven now, see, but heaven looks like a swirling unfinished painting. Williams was an art lover, so heaven is being created right before our eyes as if it really were a painting. The segments devoted to heaven's creation are jaw-droppingly gorgeous and a feast of color and inventiveness.  So far so good.

It's at this point that What Dreams May Come takes a slow, but steady, decline. Sciorra is so devastated that she commits suicide and is resigned to hell. Williams decides that he is going to go there and rescue her. I'm as big a sap as anyone, and have no trouble crying in movies that earn my tears, but in this movie, the gears of the story begin to grind to obviously, and every single solitary moment is punctuated by swelling strings on the soundtrack that literally scream "CRY DAMMIT!".  It tries way too hard to make sure the audience is reduced to wailing sobs. Since every few moments there is yet another emotional crescendo, I resisted. The movie tries again, and I resist even more. By the 3/4 mark, I was actually getting irritated and felt vaguely insulted.  Not only were the soggy scenes insulting, but the script veers off into really kooky new-agey type theology that I really wanted to tell the characters to create themselves a new movie.

The director of What Dreams May Come, Vincent Ward, is very talented director (you probably missed his little seen The Navigator and Map of the Human Heart but you should), but I feel that he didn't trust the material enough to let it stand on it's own and to allow the audience to decide for themselves how they should feel about it. He deserves credit for putting together stunning visuals, breathtaking sets, and ekeing out good performances from the cast, but it really is all for nought.

By the film's end, I already knew what was going to happen, and I really just didn't care that much anymore.