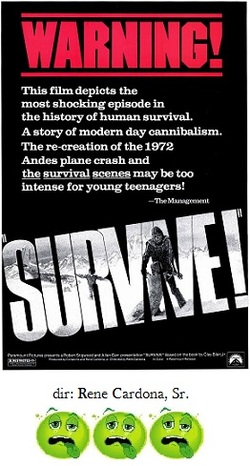 Sometimes sincerity can overcome a lack of skill, but when the
lack of skill is so prominent, no amount of good will can make up for it.  Exploitation master Rene Cardona, Sr. was the first to give us a film version of the remarkable 1972 story of the Uruguayan rugby players who had to resort to cannibalizing the dead when their airplane crashed in the Andes Mountains.  The film, Survive!, tries to overcome its bare-bones budget, sloppy writing, and general ineptitude, but in the end, it just can’t.

The first problem with Survive! is apparent early on as we are shown the rugby team, along of several other passengers, on the plane.  The script fails to give any of these people a personality; for that matter, most of them don’t even get names, and casting these roles with a bunch of actors who all look and sound alike, exacerbates the problem.  The script, by the director’s son, Rene Cardona, Jr., also uses the hoary plot device of having many of those aboard have “feelings” about whether or not the plane will crash; all of which is highly doubtful.  Also, a lot of time is spent on irrelevant side characters who’s soul function is to die immediately on impact, such as the many wasted minutes on a female passenger who is carrying a suitcase full of cash, which doesn’t amount to anything.

The scene where the crash occurs is, admittedly, quite effective and skillfully directed and edited on such a small budget.  But, alas, all of the creativity and talent was spent on this scene; the bulk of the film, which mostly stays with the survivors as they huddle and wait for rescue, is both boring and laughable.  At no point do we believe these people are actually in the mountains and in any sort of peril, what with the foggy photography, obviously phony snow, and the fact that, despite the bitter cold, you can’t see anyone’s breath.  All of this is taking place on a soundstage and it looks it.

But, since this is a Cardona film, exploitation is the name of the game, and with the story of Survive!, the main focus is the cannibalism.  Thankfully, none of the survivors come to the decision to eat the dead lightly, but that restraint is cheerily tossed out the window once the eating starts.  Even though the dead bodies have been lying in the snow and ice for days, none of them are frozen despite the supposed low temperature, so we get many shots of very warm-looking, gory flesh being stripped off of carcasses.  These moments are filmed in such a way as to make it as gruesome and stomach-churning as possible.

By the time Survive! ends with the daring trek through the mountains and the rescue of the survivors, one just wishes there was a better movie attached to these inspirational final passages. Luckily, there is a better movie for those interested in this story; Alive from 1993, although far from perfect, is at least a more skillfully made film that at least feels real.

Cardona, Sr. most likely had many good intentions when he directed Survive!, but because he was a lousy director and his son was a lousy writer and his cast were lousy actors all floundering on a phony set, Survive! could do nothing but fail.