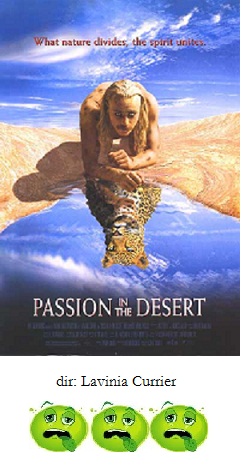 Or How I Made Love to a Leopard.

Passion in the Desert is quite a little oddity. Whenever bad adaptations of classic novels are mentioned I'm sure this one will be the subject of much conversation. Based on a novella by Honore de Balzac, Passion in the Desert is just a really, really terrible idea. It may have worked as a literary piece, but as a film, it never had a chance.

The director, Lavinia Currier, must have been the only one to see any hope of success since she also wrote the script and produced it. To her credit this is a great looking film but a terribly silly one. The story of how a soldier comes to fall in love with a leopard out in the Sahara, never clicks, not that it ever could. To deliver this tale, there were really only two choices, (1) to play it super serious and risk the snickers and chuckles from the audience, or (2) tip-toe around the central theme and induce boredom. Currier went with option number 2, but she couldn't hide this mildly bestial story.

Ben Daniels stars as a French soldier during Napoleon's reign who is caught in a sandstorm along with an artist friend while in Africa. They become lost, thirsty, and desperate, while Daniels goes in search of help, the artist goes nutso and commits suicide by drinking his paint. Daniels wanders, and wanders, and wanders until he stumbles onto a little oasis which is guarded by a sleek she-leopard, or leopardess, or whatever. At first he is frightened, but the animal appears to not pose any threat, and soon they are sharing dead animals for food, drinking water together, and basically having a frolicksome good time.

These scenes start off somewhat serene, but then take a strange turn. One shot has Daniels leaning in the sand holding the leopard in his arms like a lover and licking her fur. Ah, happiness is indeed a warm kitty.

The big crisis involves a male leopard's appearance and, since being the sensible interspecies kind of gal she is, the leopardess takes off and frolicks with him. Daniels, being the spurned boyfriend, decides he must become more catlike. He sheds his clothes, paints up his face and body with stripes and spots and walks around on all fours.  Anyway, all of this bizarre hooey ends with Daniels tying the leopardess up to a column as punishment. She gets loose and is, like, so pissed and tries to eat him, whereapon he stabs her. The final shot has him carrying her lifeless body out into the dunes where he finally collapses dead himself.

Thankfully, this flick is short enough to keep it from being truly painful. But what was Currier thinking that this was going to work...at all...ever. It was a lost cause from the word "go". Silly, pretentious, and strangely discomforting.  Hopefully, Passion in the Desert will be the last word in films dealing with man-beast romance. God only knows what would be next had this flick been a hit.

As Jeneane Garafalo so eloquently stated, in The Truth About Cats and Dogs: "Love your pets, just don't LOVE your pets."