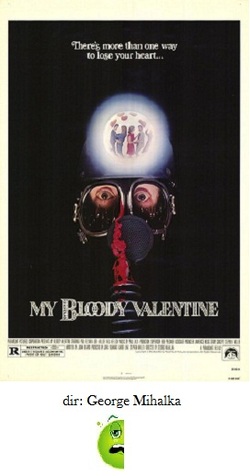 Ah the 80's. This was the era of the short-lived holiday themed slasher flick. You know, the one that started with Halloween in 1978? Well the ball really got rolling with Friday the 13th in 1980 and seemed to hit just about every holiday and special occassion on the calendar. One of the first attempts to cash in on this craze was My Bloody Valentine, which of course, is a slasher film based around Valentine's Day.

There is a local legend surrounding the small mining town of Valentine's Bluff where some 20 or so years ago, on Valentine's Day during the annual town dance, there was a mining accident that trapped several men. After weeks of digging for survivors, they found only one alive, who survived by eating the dead and subsequently went insane. The following year, the mad miner took a pickaxe and cut out the hearts of the mine's supervisors responsible for the accident, then stuffed the hearts in candy boxes, where they were found bleeding all over the appetizer table at the dance. The dance was, therefore, indefinitely cancelled.  Until now....

Twenty years later (circa 1981), Valentine's Bluff has decided to again hold another Valentine's Day dance, and no sooner than you can say "Oooh, bad idea", the crazed miner has returned to town wearing full garb complete with gas mask, mining helmet with a little light, and swinging a mean pickaxe. Needless to say, the hearts start flying.

Several local townsfolk get their hearts chunked out and sent to the local sheriff in candy boxes. Even the nice elderly lady, head of the town decorating committee, gets spiked and her de-hearted body is shoved into a laundromat drier to be discovered later, a little crispier than when she went in. All of these boxed giblets get the police force into a tizzy, so they decide to stop the dance. But, of course, a group of stupid twenty-somethings decide to defy local authorities and hold a private party at the mines. No prizes for guessing what happens next.  Yes, the murderous miner begins stalking and slaughtering the young folks for daring to party on Valentine's Day.

A few of them also go down into the mines themselves for some "private time". Let's see, one dude's head is boiled in a pot of water, a girl is spiked through her head on a shower spigot, another guy is nail-gunned in the head, etc.  Eventually it's a fight to the finish between our hero and heroine and the maniac miner who is unmasked....and.....ooooh I wouldn't dream of spoiling the "surprise" ending for you.

My Bloody Valentine is pretty typical for its genre, better than most actually. There is genuine tension and atmosphere during the scenes down in the mines, and it moves right along at a brisk pace. The only real drawbacks are some really bad acting and a long-winded subplot involving two friends who are fighting over the same girl. The soap opera drama during those scenes is heinously over the top.

If you don't go in expecting a whole lot, you might be pleasantly surprised. Considering how wretched movies of this genre can be My Bloody Valentine isn't too horrible.  Is that a recommendation? Maybe. But you still are on your own.