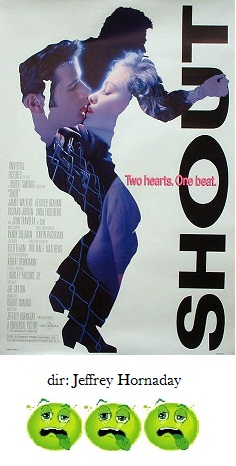 If you were to take a computer and feed it a laundry list of youth movie, rock'n'roll and inspirational teacher cliches, it might cough out a screenplay like Shout.  After about 10 minutes, you can easily predict every single plot point that will happen throughout the entire movie.

Purported to be set in the 1950s, even though there are so many anachronisms that it's hard to keep remembering this, Shout takes place in a youth prison work farm in Texas where the teens are shown the glory of rock'n'roll music by their new teacher, John Travolta.  Since this is the '50s, rock'n'roll is considered bad, bad, bad by prison warden Richard Jordan and all of the upstanding, church-going citizens in the nearby town.

Our hero here is teen inmate Jamie Walters who somehow is able to make his character so obnoxious and unlikable before the opening credits are even finished.  Walters, of course, has the hots for Heather Graham, Jordan's daughter who's home for college.  They go through the usual love-hate-love-hate routine until finally they do the nasty in his solitary confinement pen.

Enter Travolta who is supposed to get these kids ready as a band to play at a boring town festival, but they overhear him playing that new jungle music and want to play that instead.  Travolta must easily be the single best music teacher that's ever been in how in about 5 minutes he is able to get the entire passel of boys to play like seasoned veterans without a bum note to be heard.

But Shout is not satisfied with being a teen romance, a prison movie, a musical and an inspirational teacher movie, we also get the plot twist that Travolta is a wanted man for murder in Mississippi where he killed a white man in order to protect his African-American musician partner.  The sole purpose of this story wrinkle is to have the final, heartfelt scene where the boys stop playing their festival tunes and begin rockin' the gazebo while Travolta is led away in handcuffs by police.

Shout is just about as disposable a film as there ever has been.  The screenplay is on par with a made-for-TV movie, and the acting, while technically adequate, is lackluster (and, yes, that is a young Gwyneth Paltrow as a lass from the nearby private school for girls).  And the music?  Well, some of it is okay, but you'd be surprised at how much of it doesn't sound like anything that would ever have been written, performed or recorded in the 1950s (or the 1960s, either).  Shout's only function is as audio wallpaper.