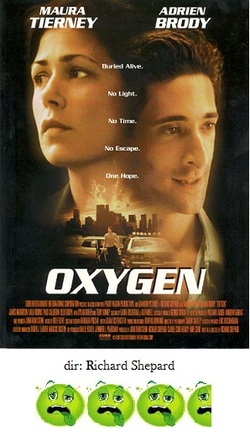 The spirits of Hannibal Lecter and John Doe from Seven, unfortunately, hang heavy over Oxygen, a desperate wannabe cult thriller. A cool plot and a couple of good performances can't save the generous theft from earlier, better movies.

Adrien Brody (a far cry from his Oscar-winning role in The Pianist), who calls himself Harry Houdini, kidnaps an art dealer's wife and buries her alive in the woods. The police have 24 hours to find her until the air in her coffin runs out. Will detective Maura Tierney (from tv's News Radio) be able to find her in time.
It's a great idea for a cat and mouse police thriller, but the filmmakers would rather have Tierney and Brody have many, many long conversations where he does his best Lecter impersonation and tries to get inside Tierney's head and tell him her darkest secrets. Her secrets? She is an alcoholic who has a fetish for kinky sex involving cigarette burns.

I'm not sure if we as an audience is really supposed to identify with Tierney and root for her success in this case. She just isn't a very good cop. She is always this side of hysteria, sometimes goes on duty drunk, forgets to wear her seatbelt in car chases so she conveniently knocks herself out. To say that Tierney handles this unlikable character and plays her splendidly isn't enough. We don't really give a damn about her.  We do care about the woman buried in the box, and we get several intercut shots of her panic as the hours tick away. One of these shots is terrifying, two is pushing it, but after several closeups of her panic stricken pace it almost appears to border on sick voyeurism.

The plot of Oxygen lumbers along slowly. Brody, who likens himself to Houdini, plans a daring escape for the finale. To say the final scenes are simply preposterous is an understatement. You see, Brody has buried a wire beneath his fingernail, and because he somehow has had floorplans to the police station interrogation room, he is able to abduct Tierney and attempt to bury her as well. How silly is all this? How does he get these floorplans? It's never made clear except to say the interrogation room is only partially painted and this somehow ties into the fact that he has droplets of yellow paint on his shoes. Um....ok.

Anyway we wind up with the tables turned on Brody and the abducted woman and Tierney fling him in the coffin. Tierney even kicks dirt on him, threatening to bury him, which of course sends him into nearly orgasmic pleasure, hissing "We're just alike, you and me! We've given into the darkside!" Tierney bores of him and simply shoots him dead.

She definitely answered my prayers. Anything to shut the guy up.