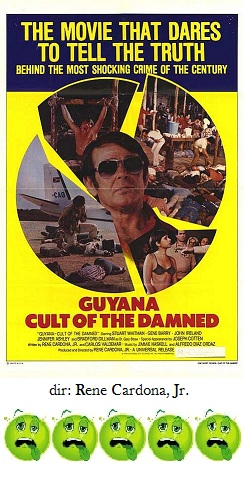 Anyone who grew up in the 1970s has probably run across one of
the many exploitation movies by the father and son dynamic duo of Rene Cardona, Sr. and Jr.  No topics were considered beyond the realm of these two supremely untalented writer/directors who wallowed in violence like pigs in slop.  Cardona, Jr. took all he learned from dear old dad and coughed up his film version of the Jim Jones story and the mass suicides of over 900 people in Jonestown, Guyana.  That film, Guyana: Cult of the Damned, is pretty much an offensive failure.

The laughable opening title card to Guyana: Cult of the Damned presumes to tell us the whole truth, while at the same time stating that some names have been changed to protect the innocent. So, even though this is supposed to be about Jim Jones and Jonestown, they’ve changed the character to James Johnson and declared his refuge in Guyana to be known as “Johnsontown.”  Who are they protecting, exactly?  Anyway, our Johnsontown guru is played by Stuart Whitman, and we are introduced to him and his followers with some absurdly quick scenes of them making plans to move their church from San Francisco to the wilds of the South American nation of Guyana.  And here is our first problem: We are never shown how this guy has such sway over all of these seemingly rational people. Where’s the charisma?  What did they all believe in?  What did they think would happen?

Never mind.  The movie is more interested in getting down to the nitty-gritty of all of the episodes of torture the followers were subjected to.  We get beatings and shootings.  We get forced labor and unlawful imprisonment.  We also get a wretched scene where three young boys are punished for stealing food; one is staked to the ground and has a basketful of snakes poured on him, another is tied to a rack and repeatedly dunked underwater, and the third is stripped, tied spread-eagled to a couple of boards and then gets electric shocks to the genitals.  Another bizarre moment occurs when a young couple is caught having sex (we are told that sex is the sole privilege of Whitman) and Whitman forces the young man into having sex with a large African-American man while the congregation watches.

On the plus side, Cardona, Jr. does provide a bit of insight into how a U.S. congressman, played by Gene Barry, became involved in the situation and wound up being killed with several other journalists as they tried to leave with several cult members who wanted to escape.  Old actomg veterans needing to cash a paycheck also appear in Guyana: Cult of the Damned, shockingly enough: Yvonne DeCarlo (known best as Lily Munster in the television comedy “The Munsters”) plays Whitman’s liaison to Georgetown, Guyana’s capital, and Joseph Cotten is one of Whitman’s lawyers.  You have to wonder how desperate for work they had to be to agree to appear in this woeful project.

Guyana: Cult of the Damned ends as it must with the mass suicides of the cultists by drinking cyanide-laced Kool-Aid.  The miserable finale shows the dozens of people, including small children, having their mouths pried open and being forced to swallow the lethal cocktail.  Even little babies are shown being dosed with eye-droppers.  And the endless parade of people all choking and screaming and frothing at the mouth before keeling over is also pretty hard to stomach (no pun intended….ok, maybe a little intended).  So, everybody dies and the credits roll and we haven’t learned a damn thing about any of it.

If you are really interested about the story of Jonestown, it’s best to seek out the made-for-TV, Guyana Tragedy: The Story of Jim Jones, starring a magnetic Powers Boothe in the title role.  Guyana: Cult of the Damned proclaims to “dare to tell the truth,” but since nearly everything is invented out of whole cloth (including the needless changing of the names of the responsible and deceased), we can safely say that that proclamation is a downright lie.