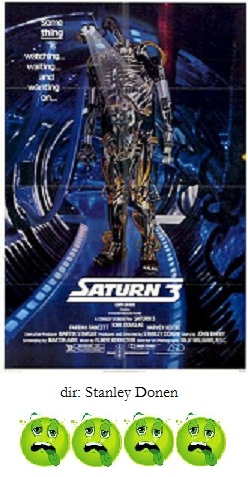 Believe it or not, Saturn 3 was made AFTER the advancement in special effects pioneered by Star Wars and Close Encounters of the Third Kind. Yet, the crappy 'spaceship toys moving across a foam rubber planet' effects shown here are expected to be taken seriously. No Dice. This is one of the most laugh-enducing big-budget all star sci-fi flicks ever made.

The film opens with a rogue astronaut, played by Harvey Keitel and whose voice sounds seriously overdubbed and phony, landing on Saturn 3, a research outpost (I think). The outpost is manned by only two people, leathery Kirk Douglas and vacuous Farrah Fawcett. What do these two "scientists" do at the outpost? I have no idea.  They are shown in spacesuits exactly once and spend the rest of the film's running time doing exercises and modeling the latest in bad disco-era, would-be futuristic, space fashions.

Anyway, Keitel's purpose is to deliver and build a new robot to take over the Saturn 3 operation, thus rendering either Douglas or Fawcett obsolete. When I say that Douglas and Fawcett don't seem to actually DO anything at the outpost, I mean it. They take a shower together, they jog along the nifty, neon-lit space corridors and hallways, they have drinks at the space bar (yes they have their own retro lounge with wet bar, sofas, and potted plants), they do jump rope and ab-roller exercises etc..  In fact, the script is so lame that these are the only scenes it could come up with to have Douglas and Fawcett talking to each other or expressing concern about Keitel and the robot, which Keitel names "Hector".

Faster than you can say "'2001 ripoff", Hector goes ballistic, killing Keitel and spending the remaining 45 minutes of screen time chasing and attacking Douglas and Fawcett. Groan!  The film ends with Douglas sacrificing himself by blowing himself and Hector up, thus sparing Fawcett (oh, he really shouldn't have). Fawcett, later sporting a fresh perm, finally gets that trip to Earth that she always wanted, sadder but wiser.

Saturn 3 is a complete washout in every department. Rarely have special effects, costumes and set decoration been so misconceived. The performances and dialogue are also pretty sad; the film almost begs to be overacted, but the cast underacts to such an extreme they almost disappear. Keitel is flat even when he's supposed to be menacing when saying things like "No taction contact!" (which means "no touching"), or when he attempts to seduce Fawcett with the hilarious line, "You have a beautiful body. May I use it?".

Douglas doesn't even try to act in this film. Usually he just stands around acting like himself because he has no real character to portray.  Fawcett is her usual vacant self, but she always looks smashing in her disco-era space pantsuits or running down hallways wearing only a sheet. At one point she has her hair done up with a monstrous barrette that looks like a sea-shell windchime dangling from her head.

Saturn 3 is silly swill that makes one wonder whether it was all done this way on purpose. No one could have thought this was a serious story....could they?