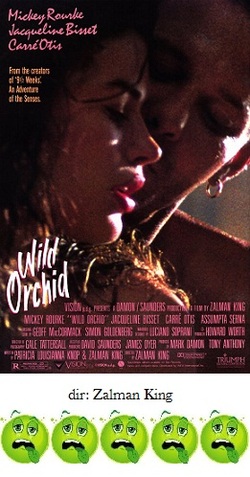 ,
If you're wondering why Mickey Rourke's award-winning performance in 2008's The Wrestler was considered a 'comeback role', you only need to look at 1990's Wild Orchid to understand just how far down the tubes his career once was.

Let's see, Rourke makes Otis wear a mask and give herself over to strange men, they ride in a limousine and watch a married couple have sex, and they basically do a lot of thrust and parry in a 'will they or won't they screw' dance that takes forever to resolve itself.  Rourke is a sensitive guy, see, and he won't let anyone get too close to his heart because of his dirt-poor upbringing.  He oozes slime and pretention across every scene while Otis does her best impersonation of a piece of driftwood.  Only Bisset brings any sense of life or energy to this movie which constantly flatlines at every given chance.  Yes, the grand finale is the big sex scene between Rourke and Otis, and despite Rourke's insistence that the scene was not a simulation, it barely registers as anything other than two pieces of meat slapping against one another in slow motion.

As silly as all of this is, it's the dialogue that is the funniest.  Well, actually, any line uttered by Otis is pretty giggle-inducing, such as admitting, "I'm not used to men in masks biting my neck", or, even better, "I guess I just let my emotions get the best of me", which she utters without anything resembling even one emotion let alone more than one.