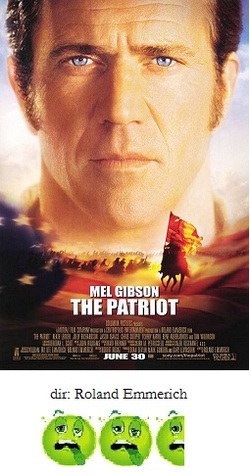 Mel Gibson has fallen into that unfortunate category of actor whose mere presence in a movie almost always guarantees you are in for a giant, expensive, mediocre ego trip.  In The Patriot, Gibson has obviously tried to mine the exact same Braveheart vein with a super-long, glossy, historical drama; however, he strikes out bigtime.

Echoes of Braveheart blanket The Patriot to such extremes that you can see every single plot point coming miles away.  It's the same story structure, same characterizations, same length, same moist closeups of Mel Gibson's distraught face, same cries of revenge....same everything. It's as if they took the script of Braveheart, tossed out all that Scottish stuff and subplanted it with a white wash of American revolutionary history and called it a day.

Gibson stars as a southern plantation owner in pre-revolutionary war America. But since Gibson's character has to be completely fault-free, he has blacks working on his land, but they are not slaves. They are free. Riiiiiight. Anyway, rumors of war begin circulating, and his eldest son, played by Heath Ledger, wants to join the colonists to battle the English. Gibson thinks this is a bad idea. He even goes so far as to travel to a conference of southern plantation owners and declare neither he, nor his kin, will fight. So right off the bat we have a problem. The film's called The Patriot but our patriot really isn't one, see?

Ledger runs away from home to fight, anyway. Enter Jason Isaacs who plays the evil English colonel, who arrives on Gibson's plantation to capture Ledger for treason. During a heated exchange and scuffle, Isaacs shoots dead one of Gibson's children. We get the first of many, many close-ups of a tear-streaked Gibson. The music swells, he sobs in slow-motion, belows "NOOOOOOOOOOOO!!!!", and then picks up a gun. He won't fight for his country, apparently, but will fight for his own revenge issues. The ad campaign for The Patriot could have read "He didn't want to fight. But THIS time it's PERSONAL!!"

And so the movie goes about for the next 2 1/2 hours, repeating itself over and over again: Battle scene, battle scene, death or injury to a loved one of Gibson, sob, sob, "REVENGE!", introspective discussion about the meaning of it all, and back again ad nauseum. I kept waiting for Gibson to grab the American flag and march off into battle crying "FREEDOM!!!" a la Braveheart...and he does grab the flag at one point, but utters no "freedom" cries.

The Patriot is loooooong, repetitive, and totally lacking any creativity or depth. The director of this sludgy period piece is hack Roland Emmerich, who foisted star-dreck like Stargate and the inexplicably popular Independence Day on us. Emmerich doesn't know a cliche he doesn't like and uses, oh, ALL of them. Sure the film is great looking, but it's just a showcase for Gibson to inflate his ego, never daring to take risks or being unconventional. It's a paint-by-numbers hero story.

The performances themselves are nothing much to write home about either. Gibson does his typical Gibson thing, which he seems to do in every movie he does.  He's kind of like the male Julia Roberts. Heath Ledger is an unremarkable blank slate giving a performance (which he rectified in spades with Brokeback Mountain and The Dark Knight). Jason Isaacs oozes foppish slime quite well as the token villain (although Tim Roth did much the same thing and better in Rob Roy-ironically, a Scottish historical epic released the same year as Braveheart and it's ten times better). Joely Richardson has a thankless role as Gibson's sister-in-law who is given nothing to do.

Maybe I'm not being fair in my comparisons of The Patriot to Braveheart, but, then again, the similarities are too obvious to ignore.  The film is a 3 hour endurance test for anyone crying out for a little originality in their movies. It is just Hollywood pap at it's most bland and unappetizing.