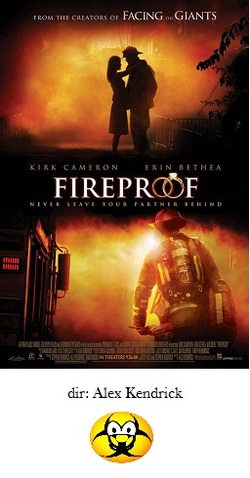 It's amateurish, pro-Christian junk like Fireproof that definitely make me question the existence of God.  It's not what Fireproof's about that is the problem; after all, great movies can be made on any subject; it's how it goes about saying what it has to say that makes it so completely dreadful.

Fireproof fails on every level.  The script is clubfooted with some of the most awkward dialogue imaginable.  Every theme and plot point is hammered home in such obvious ways that whole scenes clang against one another unnaturally.  The acting by everyone involved is akin to the level you'd see in particularly poorly-produced corporate training videos.  It's just two suicidally dull hours that drag on and on without end, but the target audience is the already indoctrinated anyway so it doesn't matter to many.  Oh, and it's pretty sexist, too.

Fireproof stars "master-thespian" and Born Again spokesman Kirk Cameron as a firefighter whose marriage to Erin Bethea is on the rocks and is about to end in divorce.  Why?  Well, really it's because Cameron is just an ass.  The complaints he has (Bethea doesn't do the shopping, cooking, and cleaning even though she works at a hospital full time) come right out of another era, while Bethea is pissed that Cameron is saving money to buy a boat and won't help pay for the hospital bed and wheelchair her stroke victim mother needs.  Please.

Anyway, Cameron's Daddy won't let his son's marriage fail so he takes him out to the convenient wooden cross out in the woods (and Cameron absolutely doesn't want any advice from a woman, his mother), preaches about how Jesus doesn't want him to get divorced and then gives him a manual that shows how he can stay married in (naturally) 40 days.  So, Cameron buys Bethea flowers and cooks dinner and buys the bed and wheelchair and, yes, the movie ends with Born Again Christian reaffirmation of their marriage vows.  Fireproof actually just ends up being an unbearably boring sermon shoehorned into writer/director Alex Kendrick's loose interpretations of story and conflict.

The biggest problem is that the character that Cameron plays is such a complete chauvinist assh*le that we want to tell Bethea to get the hell out of there, immediately.  We actually cheer her on as she has a sort-of flirtation with one of the staff doctors at the hospital; after all, Cameron is just one TV dinner away from being a wife-beater.  Maybe that's the point?  I dunno.  Even as the movie ends and Cameron "changes", he's still kind of a douche.

What does Fireproof teach us, anyway?  Divorce is evil and un-Christian.  Women need to make dinner.  Moms are stupid.  You only need 40 days to solve all of your problems.  Kirk Cameron is a lousy actor.  Just by calling your movie Christian will ensure a healthy profit because this particular targeted audience will obviously watch anythng.  The actual quality of the film itself is totally irrelevant.