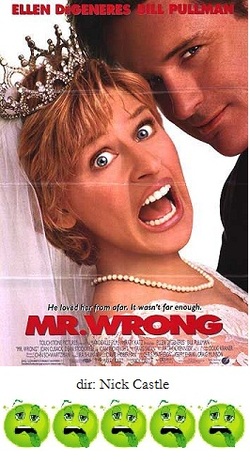 I was so sure that all of the awful things I had heard about Mr. Wrong couldn't possibly be true. After all it was the first starring role for Ellen DeGeneres, a comedienne I've been a huge fan of for many years; it also starred Bill Pullman, who has been dependably good even in bad flicks, and the dark comic plot sounded like a winner. Boy was I wrong. Dead wrong. Mr. Wrong is truly one of the un-funniest movies I've ever had the displeasure of sitting through.

The story follows DeGeneres, a single gal who has given up on dating or ever getting married. Suddenly she meets Pullman, and he seems perfect. He's smart, passionate, a poet, and an all around dream boat. Could he be the one?

DeGeneres wants to make sure that her man is honest and true, "I want you to be yourself". With that Pullman goes nutso and begins to scare and terrorize her (but in a funny way), only because he loves her so much and this is his true self. This would include dressing as a clown and climbing next to her bedroom window in stilts, or forcing her to shoplift ("Stolen beer just tastes better"), making her play charades with his very odd mother (Joan Plowright), and breaking his finger to prove how much he really loves her.

Along the way, his ex-girlfriend Inga (Joan Cusack, who steals the movie, but in this case she could have done it in her sleep) terrorizes DeGeneres by tying her up and putting gum in her hair.

All of this (unfunny) nonsense leads to a gunpoint wedding in Mexico. The single, solitary, laugh I got from this flick showed up around this time. After Pullman has dropped DeGeneres some LSD, they stop at a rest area for lunch (don't ask). While sitting there, she begins to laugh uncontrollably saying "Guess what? I'm gonna kill ya. Yes I am. I'm gonna kill ya." The reason it's funny is DeGeneres's wonderful comic delivery. As you can tell by the dialogue, this is not what could be called an intelligent or witty screenplay.

This film is only 96 min long, but I swear, a double feature of The English Patient and The Horse Whisperer would feel shorter. There is nothing, I mean nothing, more unbearably painful than a comedy without laughs.  Or in this case, one very small, meager chuckle.