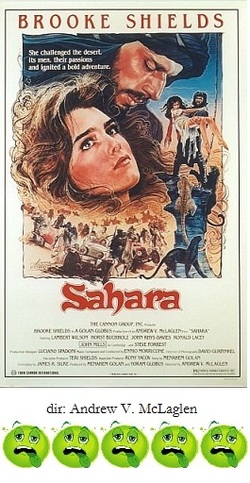 The Brooke Shields stinkbomb known as Sahara is probably my favorite bad movie of all time.  Or maybe it's just the bad movie I enjoy laughing at the most.

More than almost any other actress in history, Shields is the most dependably bad of them all (okay, I concede that a case could be made for either Pia Zadora or Bo Derek).  From the beginning of her career with Alice, Sweet Alice through to Brenda Starr and beyond, Shields has really taken the crown with one dependably bad performance after another, but whenever Brooke's films are spoken of, The Blue Lagoon and Endless Love are always mentioned, but Sahara is not. I wonder why.

Set in the 1920's, Shields stars as a race-car driver(!) whose father has designed a new car, known as the Gordon-Packard, to be raced in the "Trans-Saharan International", aka the "Sahara World Rally", a car race across the entire Sahara Desert (yeah, right). Anyway, daddums is dying, and on his death bed he makes Shields promise to enter the race. Thankfully for us, she does. Only one problem, women are forbidden to enter. So, she dresses up like a man to enter the competition, which she does, successfully, by wearing a moustache and tucking her mane underneath a hat. I guess no one noticed her eye-liner, lengthy lashes, milky, glowing skin, and thin adam's apple-less throat.

And they're off! Unfortunately for the racers, there are tribal wars raging across the sands. No sooner has Shields taken the lead, then she is attacked by a bedouin tribe, led by the tribal leader, Lambert Wilson and his henchman, the dependably bad John Rhys-Davies. Wilson has his eye on Shields to be his new harem wench, but she'll have none of it! To woo his captive, he whisks her away to his own private little oasis, which is complete with a waterfall(?). Maybe, or more likely maybe not, realizing there is not a river anywhere nearby, Brooke induces the movie's single funniest line, "A waterfall. In the middle of the desert. Who could believe it?"

There are a few sub-plots as well. The German competitor (since this is the 20's he is, of course, a bad guy), tries to help the opposing bedouins by giving them a souped up combination car/tank. The filmmakers have also helpfully distinguished the two tribes by having them wear color-coded robes and turbans (the good tribe wears black with blue trim, the bad tribe wears tan with pink trim).

Who will win the ancient tribal war? Who will win the race? Will Wilson melt Brooke's icy American heart and make her his love monkey? Will Brooke learn to act? Will the leopards in the pit eat her and finally put an end to this mess? Is there any wonder why Cannon Films went bankrupt in the 80's producing garbage like this, The Apple and King Solomon's Mines? If your answers were:  'doesn't matter, who cares?, of course, not a chance, unfortunately no, and none', then you too can make a film as good as the gloriously wretched Sahara.