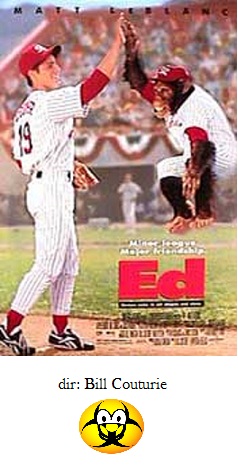 If you're a popular television actor who is looking for a movie project in order to transition into big-screen stardom, it's probably not the best idea to play second-fiddle to a chimp.  Or, in the case of Ed, second-fiddle to a little person in a particularly unconvincing chimp suit.

I suppose there's an audience for this sort of thing, but most of them haven't quite finished pre-school yet.  Matt LeBlanc, from TV's "Friends", plays the ace pitcher of the Santa Rosa Rockets, and Ed is the name of the chimp who is originally just brought along as a mascot (chimp = rocket, I suppose) but is such a great ball-player in his own right and helps lead the Rockets to victory.  See Ed catch some grounders!  See Ed jump real high!  See Ed throw real hard and set a player's mitt on fire!

Yeah.  We couldn't see these plot threads coming a mile away.  LeBlanc and chimp also become roommates.  So we get lots of jokes surrounding chimp poo, chimp farts, chimp pee, and sloppy chimp eating habits.  It's all too, too funny.   LeBlanc also has a timid romance with the single mom in his apartment building and they think nothing of letting Ed babysit for her very young daughter.  See Ed and brat pop lots of corn!  See Ed get his head stuck in an ice-cream bucket!  Oh, and in the film's main issue of conflict, the greedy club owner wants to sell Ed to a sleazy group of criminals and it's up to LeBlanc to rescue our friend and get him back on the field in time for the penant race.  See Ed locked in a cage!  See Ed dressed in humiliating clown suit while being zapped by a taser!

There just isn't much to say about Ed.  Either this is your kind of movie, or it isn't.  I don't mind a brainless comedy that doesn't require me to have to think, but I do mind when it's a comedy so completely bereft of anything resembling entertainment that actually makes it feel like by brain cells are being leeched out.

Why Matt LeBlanc felt that Ed was a project worth doing is beyond me.  But with Ed and Lost in Space, he pretty much consigned himself to sit-com hell for the rest of his career.  Good riddance.