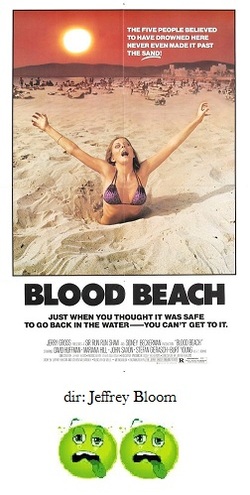 There’s something lurking under the sand at a California beach and
it’s hungry!  Or as star John Saxon sagely puts it, “It’s safe to go back in the water but now no one can get to it.”  All of this pretty much sums up Blood Beach, an odd and not entirely unsuccessful quickie horror flick that
is probably better than it has any right to be.

The first rumblings of trouble occur while a woman is walking on the
beach with her dog when suddenly her feet get stuck in the sand, and then she is slowly pulled down into it while she screams in pain.  Poof!  She’s gone. As interesting as this initial kill is, it is marred by a glaring continuity error: as she is sucked down you can clearly see a truck in the distance driving towards her, but when the movie cuts to a closeup, there is no truck (and the driver of the truck would most certainly have been a witness to the woman’s disappearance and demise, but nothing comes of it).

Over the couple of days, a headless dog is discovered and a teenage girl, who’s been buried in the sand by her friends, has her legs chewed on.  Despite this area being nicknamed "Blood Beach", swimmers and sunbathers can’t seem to stay away.  Enter detectives Saxon and Burt Young as they, along with David Huffman and Marianna Hill (who’ve “lost” people), try to learn the source of the disappearances.  And while they all spend time trying to track down the missing people, others are getting gobbled down left and right.

Blood Beach is a strangely schizophrenic horror movie that whipsaws between scenes of genuine horror and tension and others of sheer ridiculousness. An examination of two kill scenes illustrates my point: the moment when a lifeguard starts getting sucked down while the local bag lady watches is filmed an edited very well and it uses silence to great effect.  This is a terrific movie moment.  But compare that to the ludicrous and groan-inducing demise of a would-be rapist; he falls face down into the sand, penis first, and then has his offending manhood severed and devoured.

The screenplay also fails in some of its basic plotting.  You see, there’s this huge abandoned building that lies on the beach and it is so obvious that the creature (and the remains of the victims) are housed somewhere inside; and yet, it takes everyone so long to think, “Hey, maybe we should check out the old, abandoned building!”  Even in the film’s earlier passages, when most believe that the people who’ve disappeared have simply been raped and murdered, this structure should’ve been the first place anyone would look in order to find a dead body.

Lastly, we come to the finale where the creature is revealed, and it’s a disappointment.  It looks kind of like a giant Jell-O mold with these arms that end in suckers and teeth. Maybe it should’ve just stayed hidden. Anyway, it gets blown up and the movie ends with a creepy montage that suggests this creature has somehow reproduced.

Blood Beach has its moments, and for what it is, it’s sorta fun, just don’t expect a whole lot.  Because of the current trend of remaking horror flicks from the 1980s, maybe the studios should seek out less successful movies like Blood Beach that could stand some improvement instead of unnecessarily tackling true classics that have no hope of being bettered.  But what do I know?