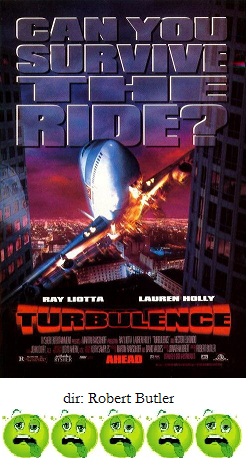 You know you're in trouble when the entire set-up to the film you are watching is so implausible that a 3 year-old would start questioning its logistics.  Case in point, Turbulence, a truly ridiculous thriller that tests the endurance and patience of even the most simple-minded moviegoer.

What's the plot, you ask? Ray Liotta stars as a suspected serial killer who is arrested and is transported to prison via jet, whereapon he escapes custody and tries to take control of the aircraft. Sounds okay so far, right? Well, I didn't mention that it's a commercial flight with other passengers, flight attendants etc., or that the flight is nearly empty despite taking place on Christmas Eve (just like all holiday flights I know), or that the inside of the jet is decorated with Christmas lights and wreaths and even a tree (no fear of injury in case of a rough flight there).

Oh, there's even another criminal on board who gets loose by picking his handcuffs with a sink fixture, even though an officer is standing behind him watching the whole time.

Anyway, all of the cops and pilots are now dead. The other passengers and stewardesses are locked away, leaving Liotta alone to take the plane. But wait!! Plucky, spunky, flight attendant Lauren Holly is still loose. So for the rest of the flick, Turbulence becomes an endless game of "stalk the stewardess". Will Holly be able to land the plane? (It's helpfully explained that the new computer console allows the jet to land itself) Or will Liotta go free? Who cares?  The most laughable moment occurs when the huge, jumbo jet goes through a powerful storm and ends up flipping around in a 360. No joke. Upside down. Now I'm willing to suspend disbelief for a film, but that's going too far.

Everything about Turbulence reeks. The performances are awful, and all of the events are supremely groan-inducing. The pace drags on and on in repetitious fashion. Sadly, it's not even good enough for a laugh.