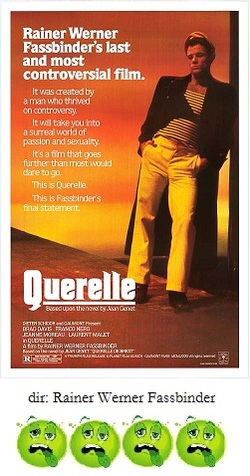 There's just isn't anything funnier than watching an acclaimed director make a total, pretentious fool of himself. Because, if a director has the clout to make anything he wants, he will almost always produce something that no moviegoer could possibly enjoy. Michael Cimino had Heaven's Gate, Francis Ford Coppola had One From the Heart, Steven Spielberg had 1941, and revered German art-house director Rainer Werner Fassbinder (Lola, The Marriage of Maria Braun) had Querelle.

Based on the twisted writings of Jean Genet, Querelle tells the sordid tale of Querelle, played by Brad Davis, a randy seaman at port in Brest, France, and how he tries to reconcile with his estranged brother while dealing with his sexuality. Sounds like a real crowd-pleaser, doesn't it? Oh, but I haven't even begun.  Brad Davis, as you may remember, starred in Midnight Express, a huge critical success that catapulted him to acclaim. Querelle was the followup which sent his career into a death-spiral from which it never recovered.

Anyway, our story sets up several characters:  first there is Querelle, his brother Robert, a torch-singer/prostitute Lysiane, and Lysiane's husband Nono. They provide the main plot thread. Robert loves Lysiane, but she is a whore who works for her husband Nono. While Querelle tries to patch things up with his brother, he visits the whorehouse to have sex with Lysiane, but first he must get past Nono.

Nono states that before anyone can sleep with Lysiane they must throw dice. If their role is higher, they get to do Lysiane, if their role is lower, Nono gets to have sex with them. Querelle rolls and loses, and then we get the first of many oddly filmed sex scenes. Of course the camera lingers on Querelle's pained face as he, ahem, pays his marker, and then a cut to Nono, filmed through what seems like vaseline at his lustful expression and sweaty face. All of the sex scenes are filmed this way, with someone getting penetrated with a screwed up face of agony, and someone else gauzily humping away. It's even classier when they spit in their hands for lube before the act commences. How selfless.

Now, a film dealing with this subject matter in a coherent and honest way is one thing, but Querelle has to be seen to be believed when it comes to arch pretentiousness. In between scenes of rutting sailors, we have several characters who have lengthy, boring philosphical internal dialogues about their "struggles" and "the meaning of it all". It turns a pace that was already a slow into something inert. There is Lieutenant Sebon who looks longingly at half-naked sailors and lusts for Querelle but just cannot bring himself to admit it, also a sailor named Mario, who wants to be his shipmates sextoy much to their amusement.

Other strangeness also occurs throughout. Querelle and Robert have a bizarrely staged knife fight, which looks more like a taffy-pull, what with the slow parries and thrusts and slow circling mixed with achingly "important" dialogue. Mario, at one point, drops his pants while in the ships galley begging to get screwed while being laughed at.  Lysiane, played by Jeanne Moreau (who was about 30 years too old to play the role of a hot-to-trot prostitute) who comes between two brothers),  and warbles this VERY annoying song throughout the entire movie. The lyrics are "Each man kills the thing he loves. Each man kills the thing he loves. Da da da. De da da da." That's the entire song. And she must sing the damn thing about 10 times, and if you know anything about Moreau's voice, you'll know I'm being generous when I say she "sings", more like she "croaks".

This being Fassbinder, though, nothing ends happily and death and tragedy must be the outcome. But since I can't say that I liked any of the characters, it didn't come as any great loss.  The only positive criticism I can say about Querelle is that the set design and cinematography are exquisite. Lush red and blue light along with a deliberately artificial-looking set design combine to create a very interesting dreamlike atmosphere. It's just a shame it was all wasted on this.