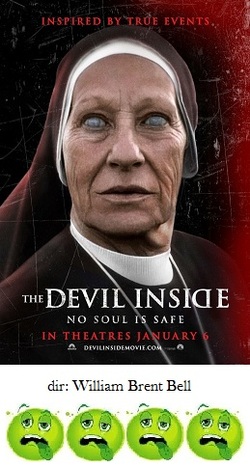 The Devil Inside, one of the latest and most lackluster entries in the 'faux documentary/found footage' movie genre, is yet another tired demonic possession flick.  The filmmakers may have wanted to elicit screams but instead they only elicit snores.

The movie begins with some decades old news footage regarding an exorcism gone bad that left three people dead.  The supposed possession victim, played by Suzan Crowley, is whisked away to a mental facility in Rome.  Now, her adult daughter (Fernanda Andrade) has decided to make a documentary about her trek to Rome and her reconnection with her mother, as well as getting to the bottom of whether Crowley is or was possessed.

Sounds promising so far, doesn't it?  Unfortunately, The Devil Inside is all build up and no pay off.  Andrade is given access to a special school devoted to training exorcists and she falls in with a couple of priests, Simon Quarterman and Evan Helmuth, who take it upon themselves to help those they believe are possessed but whom the Vatican has declared to be simply mentally disturbed.  Essentially, the film (in proper shaky-cam format) follows these three as they interview, and eventually exorcise, Crowley along with another local girl also plagued by demons.

The footage of the exorcisms, while not terribly original, at least has a bit of energy to them along with a pretty impressive display of bodily contortions by the possessed actresses.  The rest of the movie is just slack and static as we wait and wait for something scary to occur.  Most exasperating of all is the cliched device of having the demon start body-jumping from person to person which turns the movie into some laughable version of demonic 'Whack-a-Mole.'  But at least with this occurrence the film's pace starts to pick up and then....the movie just stops.  I would say it 'ends,' but that would give the impression that there might have been some thought behind how all of this wraps up.  Seriously.  Just at the point where you're thinking 'Finally!  Something's happening!" it's over.  Either the film makers ran out of money, ideas or, most likely, both.  If the first 82 minutes of The Devil Inside didn't already make you want to jeer at the screen, the final 1 minute will make you want to actually throw things at it.

So, was Crowley really possessed?  What happened during that exorcism from the beginning of the movie?  By what supposedly 'true events' did this mess become 'inspired'?  You'll find no answers or closure in The Devil Inside, a movie that plays more like a barely coherent outline than a fully realized finished product or anything worthy of being splashed across thousands of screens in the U.S.