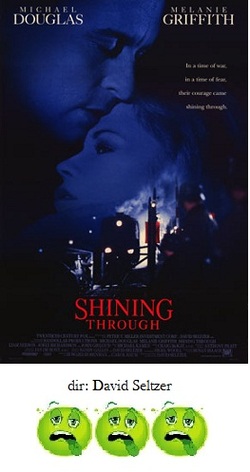 I don't know for a fact if Susan Isaac's original novel is as silly and misguided as the film adaptation on display here, but if it were, I have to wonder how in the world it ever got published in the first place.

Shining Through is a World War II-era romantic drama/espionage potboiler that stars Melanie Griffith as the American secretary to super-spy Michael Douglas who convinces him that she would make the most perfect spy imaginable.  After all, she's Jewish and speaks German, but she finally clinches the job by baking Douglas a strudel.  But wait, it gets loopier.

With little to no difficulty, Griffith winds up as the cook for the family of a powerful Nazi operative, but she screws it up big time.  Luckily, an even more powerful Nazi played by Liam Neeson takes pity on her and then hires her outright to be a nanny.  So, while taking care of Neeson's brats, Griffith occasionally sneaks into Neeson's study to take pictures of important maps and documents.  Another key role is that of Joely Richardson as Griffith's liaison between Griffith and the other members of the anti-Nazi resistance underground.  In order to get specific messages in and out of Berlin, Griffith must make several trips to order a particular fish at the market.

Shining Through spends so much of its time following Griffith in full-blown Frau Nancy Drew mode that you almost forget that Michael Douglas as even in it.  But he is.  Now, remember, Douglas is supposed to be this big-time master of international espionage, and he even goes into Germany wearing a Nazi uniform as a disguise.  The problem though, is that Douglas...can't speak German.  Really.  Hard to understand how one could succed as a spy in Nazi-era Germany and not even know how to speak the language, but Douglas does.  How?  He just ties a bloody rag around his neck and holds up a little card explaining that he has suffered an injury to the voicebox and can't speak.  He'd have to understand German to be able to interact with anybody or understand anything that was happening around him, but never mind.

Anyway, after many random plot twists and double-crosses and double-double crosses, Griffith winds up in mortal danger and Douglas comes to her rescue.  And in the meant-to-be throat-clutching finale, Douglas is shot several times while carrying a wounded Griffith across the border into Switzerland.  Luckily for them, the border is marked with a thick chalk line, so it all looks more like some sort of football game with Douglas hurling himself and Griffith into the end zone.  Once they do that, all of the Germans immediately stop shooting, which I'm sure would happen in real life.

Making Shining Through an even longer slog than it needed to be, is the totally unnecessary narrative structure where the events we are shown are actually flashbacks as told by Griffith, in atrocious old age makeup, to some television reporters.

Without a shred of realism anywhere to be found in its entirety, Shining Through only succeeds as a silly, melodramatic throwback to another era of Hollywood.  So, sit back and enjoy it for the laugh-inducing nonsense that it is.  But remember, eat strudel.