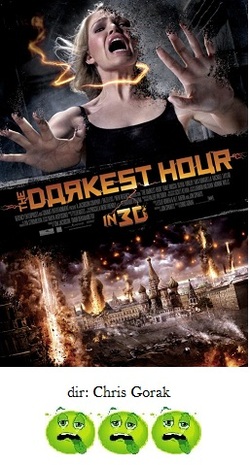 I'm not sure what the current attraction to alien invasion movies Hollywood seems to have right now, but within a twelve month period we've gotten four of these puppies:  the inventive and fun Attack the Block, the much less successful Skyline and Battle: Los Angeles and, arguably the flimsiest of the bunch, The Darkest Hour.

Our heroes here are a couple of American wannabe internet entrepreneurs, Emile Hirsch and Max Minghella, who recently arrive in Moscow to pitch their ideas.  Things don't go that well, so they drown their sorrows at a trendy bar and meet up with non-Russian babes, Olivia Thirlby and Rachael Taylor.  But oh!  What horrible timing.  Suddenly weird balls of orange light begin streaming down from the sky.  Guess what?  Aliens!  Oh, but these aliens are invisible...mostly.

They are apparently made up of electical waves or something, and when they attack we get shots of extras being lifted up in the air by an unseen force and whirled away into so much dust.  Admittedly, this effect is actually pretty cool, but that's about all that The Darkest Hour has to offer.  Those looking for great massive scenes of utter destruction will be sorely disappointed because our main characters lock themselves into a pantry for three days, and when they finally peek out, everyone has already been vaporized.  I guess this was a way to keep the budget minimal...in addition to having invisible aliens and all.

For the rest of The Darkest Hour, our group make their way through the desolate city, occasionally running into the stray survivor or two, in order to reach a submarine in the river that will whisk them to safety.  Since the aliens are electrical and stuff, they decide to wear lightbulbs around their necks, so when an alien is near they will light up and give warning.  They deduce that it is safer to travel at night (could this be 'the darkest hour' of the title?) to better see streetlights, car headlights, etc., but for whatever reason, they rarely heed their own advice and they occasionally get picked off by the unseen forces.

Do the aliens ever become visible?  Sorta.  There's some nonsense about a homemade 'microwave gun' that can 'close the circuit' and defeat the aliens, plus we are introduced to a band of Russian underground freedom fighters who are able to do some damage to them (when they do appear, they resemble gyroscopes with eyes), but none of this is ever made entirely clear.  We just have to take it on faith, I guess.  There is another weird loophole in one strange scene: the survivors make it onto a boat on the river, and then the aliens blow up a nearby building that causes the humans to be flung out into the river, all of which lasts about 10 seconds.  Anyway, once they surface they notice Thirlby is missing...you see, somehow she got catapulted several thousand feet inland to a parking lot filled with abandoned buses.  How?  Good question.

There isn't much to The Darkest Hour that hasn't been done to death many times over already.  There just isn't enough action or thrills or special effects or ingenuity to keep our interest.  The whole enterprise comes off as very bare-bones.  It's slightly better than Battle: Los Angeles but not as interesting as Skyline, if that tells you anything.