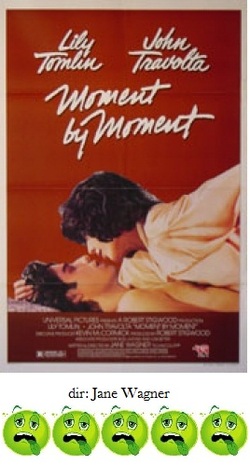 In the category of the most mismatched romantic couple in film history, Lily Tomlin and John Travolta in Moment by Moment has to rank near the top.  This older woman/younger man sudser is dreary, soggy, and at times, uncomfortably funny.

Tomlin is a rich Beverly Hills housewife whose marriage is in the toilet.  She takes off for a few days to a beachhouse and runs into hunky drifter Travolta.  Of course, she is initially put off by his attention but eventually succumbs to his 'charms.'  Even though Travolta just came off his box-office smashes Saturday Night Fever and Grease, his performance here is written and performed on the level of a particularly lame episode of Welcome Back, Kotter.  Aside from his looks it's hard to understand what Tomlin sees in this lunkhead.

For the majority of Moment by Moment we watch these two stare moonily at one another...or more precisely, Tomlin stares moonily at Travolta while Travolta looks as if he'd rather stare moonily at his own reflection in a mirror.  There are a few scenes that, I suppose, are meant to be romantic and swoon-worthy but they basically involve Tomlin moaning while Travolta takes off his shirt, which makes sense because his character's name is 'Strip'.

Anyway, the relationship (finally) runs its course and they bicker: she complains about his excessive drinking and lack of breeding and he gripes about how old she is and calls her names like 'Miss Ultra-Frost.'  He leaves, and just as we're ready for the end credits to roll, Tomlin freaks out and seemingly drives all over the state to find him and win him back.  The only tissues that'll be used in the audience is to daub away tears of laughter, or the accumulated drool from having passed out from boredom.

Moment by Moment was such a huge flop that it did serious career damage for all involved.  Tomlin, who received an Oscar Nomination in 1975 for Nashville, was using Moment by Moment as her bid to be taken seriously as a dramatic leading lady, but it didn't work, and even though Travolta had some minor success with Urban Cowboy afterwards, his 1980s career slide started right here.  As for Jane Wagner, the writer and director who is also Tomlin's long-time collaborator, she never got the opportunity to direct again, and for good reason.  From the awkward dialogue and the flatlined pacing, Moment by Moment is a complete washout.

Airings of Moment by Moment ought to be a Valentine's Day tradition for all of those who've suffered from a severe breakup.  It'll make them feel so much better, because, maybe romance and dating just aren't worth it.