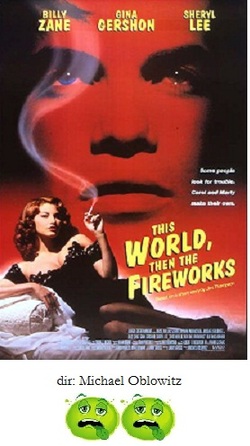 The awkwardly titled This World, Then the Fireworks is a case of a great looking but empty attempt at noir that tries and fails to hold any kind of story thread.

It's the story of a couple of brother-sister criminal types, played by Billy Zane  and Gina Gershon. When they were kids, they were scarred for life by witnessing a shootout between their father and the police, that resulted in the cop's death. In the words of the bad Dragnet-style voiceovers by Zane "The cop was dead, our father went to the electric chair, the woman he was sleeping with killed herself and mom went crazy". You see, Zane and Gershon only care about themselves, everyone else be damned. Of course everyone thinks they have a nice incestuous type relationship, the movie touches on it as a possibility, but discards it. Anyway, years later, Zane returns to his hometown and moves back in with Gershon and Mom, a doddering Rue McClanahan.

It's hard to really tell what plot this movie has, if anything. The screenplay by Larry Gross, based on a story by pulp-god Jim Thompson, goes in fits and starts. Just when you think a story thread is developing, the script jumps on to something else, and then you think "Hey, this must be where the plot starts!" but you'd be wrong. About the hour mark, I thought again that a plot thread was beginning, but it's also discarded. Oh well, all I can tell you is a series of events that transpired.

Zane arrives and gets a job at the local newspaper, but to prove a point he quits just when he was going to be promoted. Gershon works as the local prostitute; since this seems to be such a small town, it's a wonder how she doesn't get busted. Zane meets a local policewoman, played by Sheryl Lee of Twin Peaks fame, and begins a hot affair. Zane and Lee hatch some sort of plan to sell her house, which she owns with her brother, and get the money. Zane kills a P.I. by shoving his face onto a letter opener. Gershon, in the midst of "business" causes the john to die from a brain aneurysm whereupon she and Zane dump the body. Gershon kills Mom with an overdose of pain medicine then hightails it to Tijuana and dies from a botched abortion. And then comes the twist ending which I won't reveal, but it is hardly a huge surprise since such significance is given to the events of the past that have already been mentioned.

Do you see what I mean? What is the point? I haven't a clue. Sure  these characters aren't the greatest people on earth but no motives are really given for any of their behavior. Zane and Gershon are good performers, but they play their roles with almost chipper abandon leaving the audience a bit perplexed about how we should feel about them.  The direction is adequate, the period costumes, cinematography and editing are actually very good. This World, Then the Fireworks has atmosphere and mood to spare, but it is all for nought.

If only some sort of purpose were put into the script, I would have thought the movie would be quite amazing. As it is, all I kept aksing myself was why it even existed.