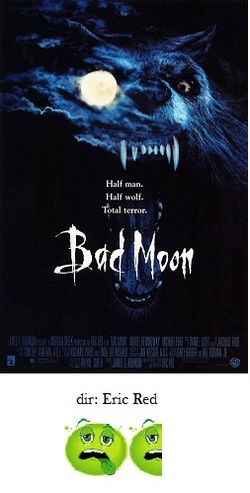 The ambitions of Bad Moon are modest to be sure, but as they say 'big risks can reap big rewards.'  Here is the first werewolf movie I've seen that is so laid back it practically falls asleep on itself.

Our werewolf is Michael Pare; on a research assignment in some jungle he and his girlfriend are attacked by a gigantic werewolf that rips her to shreds and claws Pare before he is able to blow its head off with a shotgun.  Leap-frog some months later and single mom Mariel Hemingway, who lives with her young son, Mason Gamble, and their super smart German shepherd named Thor, gets a phone call from Pare, her brother.

Anyway, Pare parks his Airstream next to Hemingway's house and we the audience begin to get angsty for when he finally turns into a werewolf.  We are told, though, that the whole 'transformation when the moon is full' thing is a myth and the reality is that werewolves transform every night.  Kinda puts a damper on one's social life, right?  But Pare decides to curb his wolfie side by pretending to go jogging every night and instead handcuffs himself around a tree.

This all sounds like the makings for a pretty decent monster movie, and if all of this took place within the first ten or fifteen minutes, I would agree, but Bad Moon takes nearly 3/4 of its running time to even get to this point, and by then, few will be left caring.  Oh, and no prizes in guessing that Thor the Dog is the only character who realizes something strange is going on.  Humans may be slow on the uptake, but animals always know who's bad news.

A big problem with Bad Moon is in the writing of the character played by Pare.  For the bulk of the movie, he's basically a good guy who is in a terrible situation.  He is trying to find a cure and chains himself try in order not to kill anyone.  So far so good; however, for no reason whatsoever, his personality does a complete 180 and suddenly he's being all evil and manevolent.  Really, it's like he's good one second and the next second he's suddenly a meanie.  I guess writer-director Eric Red, didn't want all the messiness of having the audience go into a moral quandary by making Pare's character too ambiguous.  It's much simpler to root for his demise if he was a clear-cut villain instead of having that pesky third-dimension.  So, yeah, the movie ends as you may predict with Pare-as-Werewolf trying to kill Hemingway, Gamble and Thor, and Thor saving the day by killing Pare.

Bad Moon isn't a total wash.  The acting by the entire cast is good, with a special shout-out to Primo, the dog playing Thor, and the movie looks slick and professional.  The special effects are a bit cut-rate, but not so much as to be too distracting.  The whole enterprise just suffers from a curious lack of energy and conviction; it takes its sweet time chugging through a simplistic, obvious story, offering no surprises for anyone who's seen other, better werewolf movies.  Find one of those if you're looking for excitement because you certainly won't find it here.