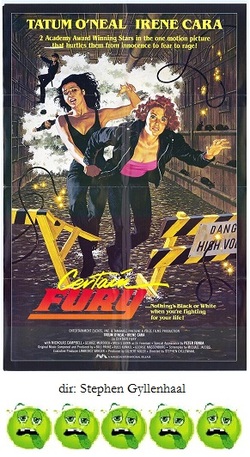 Blank-eyed Tatum stars as Scarlet, a bitter illiterate streetwalker in the big city (which one? The movie never tells). She and a bunch of other working girls are hauled into a courtroom to begin their hearings, amongst them is Irene Cara, a rich girl who has been picked up for automobile theft. As the hearings begin, a blonde hooker begins to disrupt the proceedings by singing a love song, badly, and dancing around the courtroom, whereapon she slashes a guard's throat and steals his gun. Her hooker pal pulls out a shotgun from out of nowhere and the two of them begin to blast the bejesus out of everything and everyone in sight. A bloodbath ensues, guards and bystanders are riddled with bullets, and basically the courtroom is painted red until the blonde hooker gets blasted in the chest.

During the melee, O'Neal, Cara and the hooker with the shotgun flee; all the while the hooker blasts more cops until, while climbing over an iron gate, they grab her feet and which causes her to be impaled on the gate's upper spikes. Our gals, thankfully, find a convenient manhole and hide in the sewers.  Yes, readers, this all happens in the first five minutes!! But after this frantic beginning, everything sloooooows to a crawl. You see, O'Neal and Cara, are now wanted by the cops for the courtroom shootings and are being hunted down.

This is where things get wretched and funny in equal measures. Try not to laugh when the detectives arrive at the courtroom and the police chief shakes his head and says "We've got seven people in the morgue!" Seven?? Is that it? Trust me, it's closer to 70, unless all of the those victims survived their gaping, sucking chest wounds.

Anyway, while down in the sewers, which, by the way, has the cleanest most refreshing looking sewer water ever, another cop accidentally drowns. How? After he corners our heroines, he lights a cigarette in victory, which ignites the sewer gas causing an explosion! The girls escape (by a convenient heating vent which all sewers have I'm sure, that leads right into the middle of hotel lobby!) and proceed to run through the city accompanied by the lamest music score ever, which sounds not unlike the warped theme music to those elementary school film strips.

Of course, O'Neal is a tough girl and doesn't want Cara hanging around, threatening her with a broken bottle. As performed by the squeaky-voiced O'Neal, she has all of the intimidation of a constipated chihuahua. Anyway, O'Neal calls Cara "stupid n*gger" and Cara calls O'Neal an "illiterate white-trash whore", naturally they bond.

O'Neal goes back to see Sniffer, who has now been beaten senseless by Cara. Cara, of course, is upset at being left there by O'Neal, but as 'performed' by Irene Cara, she uses an "upset" face and utters her lines with all of the conviction of "Pass the chips."  Next they head off to the local heroin den to sell some dope for cash. While O'Neal strikes a deal, Cara decides to TAKE A NAP!! Yes, amidst all of the addicts shooting up, (there are constant moans of ecstasy on the soundtrack to drive home the point), she lays her gun down and goes to sleep. Of course, Sniffer finds them and forcibily shoots Cara up with heroin (note the angle in which this event is filmed and you'll see the hypodermic actually going into the bed and not anywhere near her arm). There is an explosion which causes the building to burn while Sniffer and O'Neal duke it out in a laughably choreographed fight which tries, but fails, to convince us that O'Neal could even remotely win. She does. He burns up. They find an open window and escape, neglecting to tell any of the other people in the house that there is a way to safety, so everyone else dies. What stand-up gals!

Finally, our girls start walking across some abandoned railroad tracks to freedom only to be stopped by the cops. O'Neal keeps running and is shot, but, alas, not killed. It's only to set up a final shot of Cara holding O'Neal's hand, sobbing and exclaiming "We gotta stick together, til the end!"

What a monstrosity Certain Fury is. Tatum O'Neal and Irene Cara are just godawful, but even Meryl Streep and Jessica Lange couldn't recite the lines in this inane screenplay and make it convincing. Everything about this movie is a failure, from the direction, acting, screenplay, editing and the bad dye job done to O'Neal's hair that constantly changes throughout the entire film or the knife wound to her face that changes in length and sometimes disappear altogether.

To say the least, Certain Fury is equally hilarious and painful. Yes, someone somwhere thought this movie was a good idea. God help them!