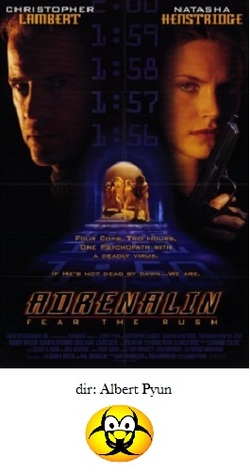 There are good movies, there are bad movies, and then there are movies that can accurately be called 'anti-movies.'  They could be described as what would result if a bad movie were to collapse in on itself, like a dying star.  The crushing, black hole of nothingness would be all that would remain.  The ironically named Adrenalin: Fear the Rush is such an anti-movie.

Things get off to a very rocky start as the long-winded voice-over narration by Natasha Henstridge provides endless set-up exposition.  You see, after a 'nucular' war there is mass world-wide chaos, as the handy stock footage depicts for us.  Also, there's some sort of disease that has run rampant and has caused most cities to wall themselves off from exposure.  The first scene shows an infected man, driven mad and murderous, killing another man and disappearing into an abandoned building.  This will be as exciting and involving as the movie will get.

Natasha Henstridge and Christopher Lambert (two of the most wooden actors ever) are two cops, or as their uniforms call them, 'Policia.'  They, along with two others, track the madman down into the bowels and tunnels of the aforementioned building.  For the entire rest of the movie, we will watch these dumbells walk and crawl and climb through an endless array of passages while carrying flashlights and stomping through water puddles.  That's it.  There's nothing else.

They walk.  They trudge.  They turn corners.  They splash through the puddles.  Funniest of all, they can't seem to find their way out.  Why?  No reason.  To get a real idea of how ineptly filmed Adrenalin: Fear the Rush is, just check out the 'suspenseful' moment when Lambert accidentally falls through a pointless open shaft; he struggles to pull himself out while Henstridge watches.  The editing here is so bad (and is equally bad elsewhere) there's no sense of space or point of reference.  Is he climbing up or down?  Is he right side up or upside down?  Is Henstridge looking down or straight ahead?  How far away are they?  It's impossible to answer these questions.  During this scene, the madman suddenly appears behind Henstridge, leans in with open jaws ready to tear out her throat, and then suddenly she turns around and 'poof' he's gone.  How?  Who knows?  Countless times the madman could've (and should've) eviscerated these losers, but doesn't, even tying them up at one point and 'pretending' to stab them.  As a joke, I guess.

Adrenalin: Fear the Rush is the emptiest, longest non-experience ever.  What should we expect from director Albert Pyun, known for such masterworks as Dollman, Alien in L.A., Kickboxer 4: The Aggressor, and Nemesis 4: Death Angel.  It's 77 minutes of agonizing, torturous boredom.  A better title would've been Cyanide: Embrace Oblivion.