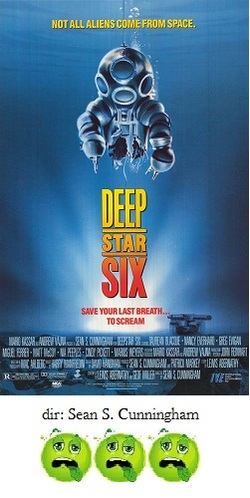 Many times the ambition of vision greatly outstrips realistic expectations.  Director Sean S. Cunningham (Friday the 13th, Spring Break) was trying to create a sort of Alien-in-the-sea, but a flimsy budget, a nonsensical script and an unengaged cast all combine to make DeepStar Six a cheesy creature feature.

The plot involves a group of miners and scientists (I think) who are living and working in a lab structure on the bottom of the ocean.  While drilling through a wall of rock, they unleash a giant marine monster that proceeds to chow down on them in predictable fashion.  There's really not much else to say about the story, after all, it's something we've seen many times before and will no doubt see many times in the future.  So it all comes down to how well crafted and suspenseful it is.  DeepStar Six is neither.

The sets are nothing special, just your standard array of metallic corridors, blinking lights, levers and video monitors, most of which are never used and could've easily been scavenged from some lame sci-fi film from the 60s.  Despite all of the underwater scenes filmed with obvious miniatures, you never get the feeling that any of these characters are actually under the sea.  Then again, you never can quite believe this group of idiots are actually capable of performing the jobs their characters are supposedly being paid to do.  There's just lots of standing or running around and sitting in the dining hall; it's not until the creature goes on the rampage do any of them show any signs of life.  Of the few recognizable faces in the cast (Greg Evigan, Elya Baskin, Nia Peeples) only Miguel Ferrer, as the cowardly weasel archetype, makes any impact.

About that creature.... Let's just say, it needed serious work.  Not for one second is it believable, but of course, there are barely any shots where you are able to get a real clear look at it, which is probably for the best.  What is visible is just so much foam rubber and latex.  The monster is so phony that you practically see the wires that make it move and open its jaws.  There's also an issue of the creature's size, which seems to change from scene to scene; at one point it is apparently so big it eats two men and the sub they are in, and then it's small enough to fit through a portal and into a flooding room and even then none of the characters seem to be able to see it in the water.   And then, in the final moments, when the survivors have made it to the ocean's surface, the creature, is again, mega-huge.

If you just want a brainless monster flick, DeepStar Six is a pretty harmless choice.  At least it moves at a quick pace and makes the time go by fairly quickly.  Just don't expect much, then you won't be too disappointed.