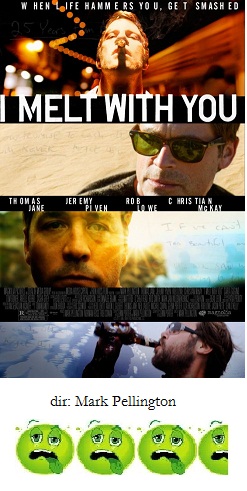 A quartet of former college buddies, now reduced to unhappy 40-somethings, have an annual get-together for a week of partying and excess to, I don’t know, reclaim their youth or something.  They are comprised of Thomas Jane, a failed novelist turned English teacher, Jeremy Piven, a crooked investment banker, Rob Lowe, a doctor who trades scrip for sex, and Christian McKay, a miserable gay dealing with the guilt surrounding the death of his lover.  The film was doomed to failure because it never makes any of these guys likable or sympathetic in any way.  They simply wallow in their miseries and unhappiness taking the time to guzzle down gallons of booze, swallowing handfuls of pills and trying to bed any poor female sap that happens to get in the way.

All of this repetitive nonsense goes on endlessly with one party following another, and the occasional scenes involving drunken, reckless driving, projectile vomiting, or bouts of self-pity regarding lost youths.  To make it even more irritating, every scene is filtered through a cuisinart-style editing job, a relentless musical score that attempts (but fails) to drown out all of the dialogue and washed out, over-exposed cinematography.  Actress Carla Gugino is completely wasted in the role of a local sheriff who, for no apparent reason, begins snooping around the guys’ party house.  Really, the only reason this character exists is to have at least someone observing this nonsense from the outside.

And then…things get really bananas.  It really would be a shame to spoil the inevitable ‘WTF?” moment you’ll experience when it becomes clear where the plot is leading; but let’s just say it involves a juvenile pact the guys made in college while they were obviously blitzed on some type of chemical enhancement.  Truly, the second half of I Melt With You has to be seen to be believed.  Didn’t anybody realize that this script was totally unfilmable?  There isn’t a single realistic scene, character or line of dialogue throughout its entire 104 minutes.