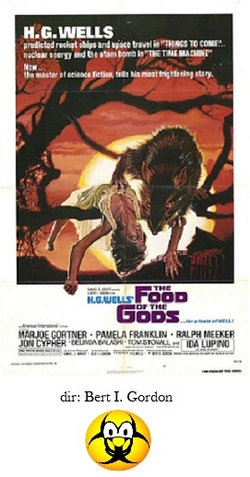 Director Bert I. Gordon (Village of the Giants, Empire of the Ants) was pretty much the Uwe Boll (House of the Dead, Alone in the Dark) of his day; if you saw his name on a movie you could be guaranteed it would be a steaming pile.  Using H.G. Wells's novel as source material, Gordon managed to make a movie that was so poorly imagined and executed it has to be seen to be believed.  Lousy acting (from such 'stars' of today and yesterday- circa 1976 - Marjoe Gortner and Ida Lupino), hideous dialogue and dreadful special effects are all brought to a standstill by the glacial pacing.  It would all be so much funnier if it just weren't so unbelievably slow.

The plot involves a small Canadian island that is overrun by giant animals.  We've got your giant wasps, humongous worms, titanic rats and massive chickens.  You see, there suddenly came a fissure in the ground and a strange white goop came spurting out, and as anyone would do in such a situation, farmers Lupino and Ralph Meeker decide to feed it to the chickens.  Before you can say 'KFC's on me, tonight!", the other animals in the area decide to eat it, too, with the naturally tragic results to follow.  The cast spends the entire film battling badly projected images of wildlife or duking it out with horrendous foam rubber chicken beaks or rat faces that occasionally pop onto the screen so there might be something organic sharing the screen with them.  The finale, where we are supposed to accept that what looks like a row of popcicle sticks blocking a trickle is actually the nearby dam (on an island no less), and then having said dam 'explode' drowning the rats that are crawling over a poorly superimposed 'house', is the sort of thing bad movie fans live for.  Just, no.

The Food of the Gods has zero entertainment value, even for masochists (like me) who enjoy a good cinematic trainwreck once in a while.  If a scene involving Ida Lupino getting her arm chewed off my a sink full of giant (fake) worms sounds like fun, then be my guest.