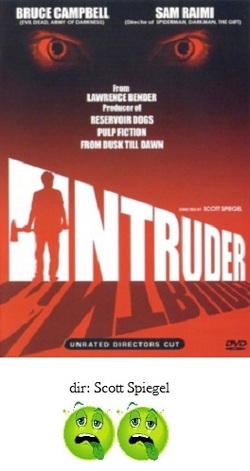 I suppose Intruder, a very late entry in the 1980s slasher movie sweepstakes, should receive some cool points for including such horror icons as Sam Raimi and Bruce Campbell or for some of the inventive death scenes, but really there isn’t much here to satisfy.  Intruder is just the same old thing: teens in badly dated hairstyles and clothes getting butchered one after the other.

In a desperate attempt to find an original setting, since summer camps, shopping malls and creepy manses had all been played out, Intruder takes place in a grocery store.  You see, the employees of this grocery store have just been told that the store has been sold and their jobs will end within the month; and now, they must work the overnight shift to put all of the merchandise on sale.  Oh, and there’s someone lurking in the aisles ready to dispatch our cast with all sorts of nasty implements and machines.  There is a half-hearted and altogether obvious attempt to set up one particular character as the killer, but even novice viewers of slasher films will figure that out.

The  huge red herring is the surly ex-boyfriend of our heroine, Elizabeth Cox.  He causes some trouble in the store and is thrown out and soon thereafter the killings begin.  Sam Raimi, as the store butcher, gets a meat hook in the throat, brother Ted Raimi, as the slow-witted stock boy, gets a knife in the head cutting his Walkman headphones in two; we also get a slow eye-piercing, another victim’s head is squashed by a hydraulic press and, in the most infamous scene, a poor guy gets his head slowly cut in half by a band saw.  For serious gore hounds, these moments are probably enough to get Intruder a hearty recommendation; but for me, I just wish there was even a modicum of suspense or some genuine effort.  The ending is kind of interesting: the killer dies and the cops show up just in time to arrest the last two living characters for murder.

About the only elements of originality on hand are the bizarre choices in camera placement which, interesting as some of them are, don’t add anything.  Sure, placing a camera within a moving shopping cart is more interesting (and understandable) than a static shot of the paper products aisle, but what was gained from having a point of view shot from the inside of a telephone?  Is it there just so that the film makers can say that they were the first ones to do it?  Throughout Intruder the camera films through jars of colored liquid, or up from underneath the floors or from other odd places just to highlight such cinematographical gymnastics.

All of the cast members pretty much give the bare minimum required for this type of film.  If we didn’t know who Sam and Ted Raimi were, we’d never even notice them.  Oh, and did I mention Bruce Campbell is also heavily advertised as being in Intruder?  I kid you not, I watched out for him and never figured out who he was.  Apparently, Campbell has a very brief, blink-and-you’ll-miss-it cameo as a cop, and I guess I blinked.  Cox is adequate as our “final girl,” but everyone else is negligible.

Intruder isn’t anywhere near the worst of the genre and it’s relatively easy to sit through waiting for the bloodletting, but it isn’t special enough to warrant a place in the slasher movie Hall of Fame.  Hmm…if I built it, would they come?