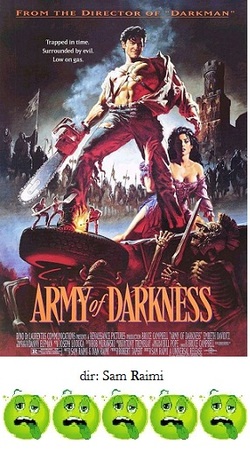 Yeah, I know, I'm bound to get hate mail over this one from its legion of fans.  All I can say is: I want to like it, I do, but it's just bad.  Let me first set the record straight.  I think that The Evil Dead is one of the scariest and most inventive horror films of the 1980s and I think that The Evil Dead II: Dead by Dawn is a brilliant satirical riff on the first movie.  I covet those two movies, which makes my dislike for Army of Darkness, the third in the series, so depressing.

No, I don't need to be told to watch it again.  I own a copy of it, and every couple of years or so I pull it out and try again, hoping that this time I'll like it better.  I still maintain that Army of Darkness is just this side of being unwatchable.

Army of Darkness begins where Evil Dead II left off with Ash (Bruce Campbell) being sucked into the vortex and spit back out in the middle ages.  The plot revolves around Ash trying to find the Necronomicon (again) and find a way back home all the while battling against the demonic forces of evil.  This time those forces are usually in the form of walking skeletons.  So what we have here is a cross-pollenation of the Evil Dead story with an Arthurian-style tale of brave knights, swordfights and fair maidens to be rescued.  This explanation that I've provided is much more lucid than the way the garbled screenplay tells it, which just gallops from one scene to the next without bothering with such things as logic or story progression.

The first problem with Army of Darkness is how cheap and cheesy it looks.  This was not an issue when the movies stayed put in the cabin in the woods, but since the story has been opened up, they could have at least tried to make it look a little bit more polished.  Frankly, the entire movie looks as if it were shot in someone's backyard with a bunch of Renaissance Fair rejects.  It all makes the movie feel much, much longer than the scant 81 minute running time.  Nothing about this time or place is convincing in the slightest.

The special effects are cheesy, as expected.  But for a movie that had four times the budget of the first two movies combined, the effects actually shouldn't look worse.  But they do.  Much, much worse, sloppily superimposing the fiends over top of the actors in a distracting fashion not seen since The Clash of the Titans in 1981.  And, finally, there is the question of the humor level.  For whatever reason, Raimi has pitched the comedy for the lowest common denominator.  Seriously, when the scene where the skeletons pop up to do a "Three Stooges" routine, I check out.

Maybe one day Sam Raimi and Bruce Campbell will join forces again to provide another installment to the Evil Dead saga.  But if they can't come up with anything better than Army of Darkness, they might as well not bother trying.