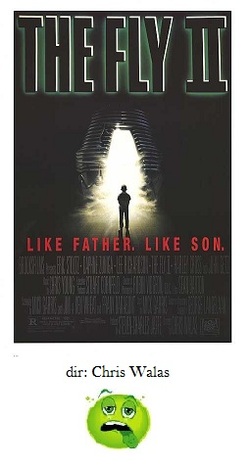 It can be argued that all sequels are completely unneccesary.  But few sequels feels as pointless or redundant as The Fly II, the sequel to David Cronenberg's terrific 1986 film, The Fly.  Not only did the makers of this follow-up not really advance the story in any meaningful way but they just replicated it.

The Fly II opens with a nauseating child birth scene where the Geena Davis character, not played by Geena Davis this time, expells a maggot from her womb.  Luckily the doctors decide to cut it open and they find a baby boy inside.  Within a span of 5 years, the tot grows into Eric Stoltz, and he spends all of his time in the top secret lab trying to replicate Jeff Goldblum's transporter pod invention.  Of course, since Stoltz is part fly, we just wait for the inevitable transformation scenes.

And that's about all there is to The Fly II.  There's a brief romance between Stoltz and employee Daphne Zuniga, and there is the slimy head scientist, Lee Richardson, who desperately awaits Stoltz's fly-dom while only pretending to keep him medicated to prevent it.  And, yes, Stoltz starts changing into a fly and we are treated to lukewarm retreads of the exact same scenes from The Fly complete with body parts dropping off and those tragic dermatological changes.

The anemic screenplay is, surprisingly, co-written by two future vets known for their Stephen King adaptations, the terrific Frank Darabont (The Shawshank Redemption, The Green Mile, The Mist) and total hack Mick Garris (Sleepwalkers, Riding the Bullet and the uber-lame The Shining TV mini-series).  Why nobody involved realized they weren't offering anything new or special is the big mystery here.  It's just a lot of empty, slow nonsense that culminates with the Stoltz-as-Fly creature running around the lab, spewing so much fly vomit on security guards and scientists until he drags a screaming Richardson with him inside a transporter pod.  I guess they figured that having the Stoltz character actually re-transform back to a human afterwards (How?  It's anybody's guess) is the big twist that separates this movie from the other.  It does, but not in a good way.

So, what's good about it?  The acting by the cast is fine and Stoltz does a good job of making his character sympathetic despite having nothing in the screenplay to really work with.  Stoltz is usually such a discriminating performer who usually chooses his projects wisely, so why he accepted this role represents a curious lack of judgment.  The makeup and creature design is good, but we saw it all before.

The Fly II isn't a bad movie, exactly.  It's easy enough to watch without significant pain and it offers some good, gooey fun during its concluding scenes of mayhem.  But since nobody involved tried to do anything different with the premise, you have to wonder why they bothered with it at all.  There's no compelling reason why it even exists.