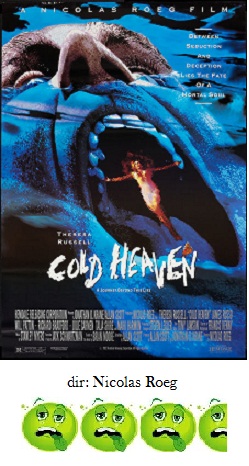 Nicolas Roeg is a very talented director who is always willing to take big risks.  Sometimes those risks pay off (Walkabout, Don't Look Now, The Witches), and sometimes they don't (Bad Timing, Track 29, Eureka).  Cold Heaven starts off well, but devolves into a morass of confused religious symbolism and incomprehension.

Theresa Russell (Roeg's former wife and muse) is the wife of wealthy physician Mark Harmon, but she's having an affair with James Russo.  While vacationing in Mexico, and before she can ask for a divorce, Harmon is run down by a speeding motorboat and is pronounced dead.  This would seem to be the answer to Russell's prayers; unfortunately, Harmon's body disappears from the morgue.  After she arrives back in the US, Russell begins finding strange clues that lead her to an out of the way hotel on the coast.  When she arrives, who does she find?  Her husband.

Up until this point, Cold Heaven does a good job drawing us into this mysterious situation.  We genuinely want to know how this plot will work itself out and provide us with answers to whether Harmon is really dead or not, or if Russell is losing her mind.  Unfortunately, everything disintegrates from here.

Harmon seems to be alive, but then...dies again?  Russo arrives and has Harmon hospitalized, where he...dies a third time?  Then out of nowhere, Russell goes to a local Catholic church to tell the monsignor about a vision she had years earlier where she saw the image of the Virgin Mary coming out of a shrub that told her to have a sanctuary built along the cliffs.  No, really.  The last half of the movie devolves into disconnected and hallucinatory imagery of butterflies, mystical thunderstorms and a giant crucifix of moss emblazoned on a cliffside.  Harmon's alive?  I think, maybe?  How this is remains very unclear.  After awhile you just give up trying to understand what's going on or why and you simply tune out.

Cold Heaven is just a mess.  There is talent both behind and in front of the camera (Russell and Harmon are actually quite good), but one just wishes it was all for something that was more interesting than this curious, confused fiasco.