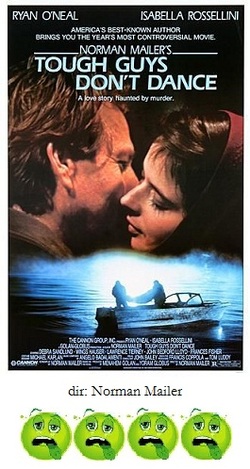 ·
Rarely does a film come along that is such a completely unbelievable trainwreck, that it truly has to be seen to be believed.  Norman Mailer's bewildering fiasco Tough Guys Don't Dance is such a film.  This movie has more laughs per minute than most so-called comedies, even though it's supposedly a very serious love story/murder mystery.

The first sign that things are going to go awry are the opening credits.  Those that feel that a novelist himself should be the ideal person to adapt his own material to the screen and then also direct, should look to this film as a dire warning.  Norman Mailer is so in love with his ridiculous story and his maddening, purple prose; combine this with a complete lack of directing ability, and you are in bad movie nirvana.

Dependably awful Ryan O'Neal stars as a sad-sack raging alcoholic whose rich, southern-belle wife (Debra Sandlund) has just left him.  One night while drinking in a bar, he befriends a strange couple, wimpy R. Patrick Sullivan and vampy Frances Fisher; and they get together to drink, do coke and screw.  The next morning O'Neal awakens in his own home having blacked out the night before, only to find his car seats soaked in blood, and then he finds a woman's decapitated head shoved into the secret hiding hole in the woods where he keeps his drug stash.  It all sounds like an interesting set-up for a cracker-jack mystery, but really it's just a loose clothesline on which to hang some of the worst acting, nonsensical plot twists, and pretentious dialogue and directing "touches".

Since they cast Ryan O'Neal, this movie was already halfway sunk before one frame was even shot.  Even with wildly unkempt hair, bags under his eyes, rumpled clothes, all the while snorting coke and guzzling booze, O'Neal's preformance is more wooden than a Louisville Slugger.  Every line reading is given the least amount of effort is as possible without acutally being asleep.  But O'Neal's non-performance is nicely counterbalanced by the complete scenery inhaling by Debra Sandlund, who basically stands around bugging her eyes, pursing her lips, and using the thickest, weirdest southern accent known to man.  Sandlund is matched by John Bedford Lloyd who plays one of her earlier husbands, also with a deadly hysterical southern accent delivered with an effete whine.  And to top it all off is overactor extraordinaire Wings Hauser as the local sheriff, snarling, growling, glowering and basically breathing fire with every line, until for reasons not really clear, he starts talking like a stroke-victim in the film's finale.

But with all this wretching acting, Mailer himself keeps pace with his tortured directing attempt.  Obviously clueless about how to stage any shots, most of the film is comprised of 2 people talking in a static, TV movie, rhythm, be it at a bar, in bed, in the kitchen, in an office, in a car or what have you.  When he does break out with some flourishes, they don't work.  The funniest of all has O'Neal, walking on the beach reading a letter, afterwards he repeats over and over "Oh God! Oh Man! Oh God! Oh Man! Oh God!......" while Mailer spins the camera in a frantic circle, just so we know that O'Neal is, I guess, agitated.  Top all of this with some truly priceless dialogue, such as Sandlund discussing her hair color: "My p*ssy hair was golden in high school.  Until it was scorched off by the football team!" or Isabella Rossellini (who is the only actor in the film to get through it with even a modicum of dignity): "He screws me five times a night.  That's why I call him Mr. Five."  Yes, what may have worked on the page, doesn't translate to the screen at all.

Anyway, suffice it to say, most of the cast is dead by the end with would-be 'twists' you can see coming a mile away.  Pile on some of the most inane musical score choices that undermine every single scene. Add a dash of homophobia, and a streak of misogyny to make everything just a wee bit slimy.  Shake well (preferrably while completely hammered) and serve.

Is Tough Guys Don't Dance bad?  You betcha.  But I have to admit, I was thoroughly entertained and couldn't take my eyes off the screen.  Few films have this type of insane, car-crash watchability, and when one does appear, it's a must-see.