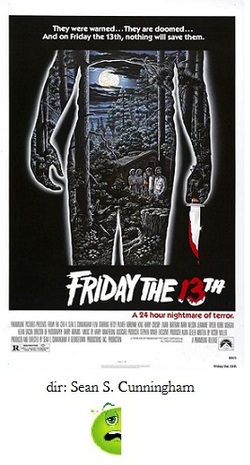 In 1978, John Carpenter directed a low-budget thriller called Halloween. In that film, a mad slasher stalked and slaughtered a bunch of teenagers. It was a simple story, filmed on a shoe-string budget, and went on to make about a bazillion dollars at the box-office. Enter director Sean S. Cunningham. He decides to take the premise of Halloween (several nubile teens stalked by a killer), and upped the ante by showing copious amounts of gore and, voila, Friday the 13th is born and 11 (!) sequels have since followed.

Like it or not, Friday the 13th, not Halloween is responsible for the ridiculous glut of mad-slasher films that permeated the 80s, such as, but not limited to, My Bloody Valentine, New Year's Evil, Graduation Day, Happy Birthday to Me, Silent Night, Deadly Night, Final Exam, Night School, The Prowler, The Mutilator, Humongous, The Burning, Madman etc. etc. etc. Each one more inept and disgusting than the last. So, is Friday the 13th any good? Well, it's the best of the series, if that says anything.

The plot should, by now, be very familiar. In 1957, at Camp Crystal Lake, a young boy drowns. The two counselors who were supposed to be looking after the boy are discovered making out, and are quickly slaughtered by a faceless killer. Jump to the present (circa 1980), and Camp Crystal Lake is set to be reopened by a ragtag group of twenty-somethings. Bloodshed ensues. In a way, Friday the 13th is sort of a more up to date, less clever version of Agatha Christie's Ten Little Indians, only with several gallons of blood. And for what it is, and because it was the first of its kind, it works.

Like all of these movies, though, one thing the filmmaker's never waste time on, is character development. Sure, the characters have names, but little else, and in some cases (especially the later films in this series) the characters barely have names at all. So lets run down the list of the victims: Steve Christy, who is the one responsible for opening the camp, Annie-the cook, Ned-the prankster, Jack and Marcie-the stud and slut, Alice and Brenda-the good girls and Bill-the good guy.

As we open, Annie is hitching her way to the camp. After being warned by the locals that the camp is known as 'Camp Blood' and has a death curse, she cheerily accepts a ride in an ominous black Jeep. She quickly realizes she's in danger, and jumps out of the speeding vehicle and is chased through the woods, but is caught and is dispatched by having her throat slashed open.  Next are several scenes with the rest of the cast already at camp, and there is lots of pranking and swimming and general good times. But a killer watches and waits. Then night falls. Ned follows someone into a cabin and vanishes. Jack and Marcie do the wild thing in the bottom bunk of a bed while Ned's slashed corpse is on the top (they don't see it, however they couldn't possibly have missed it when they entered the cabin, but whatever). While Marcie goes to another cabin to use the bathroom, Jack is killed by an arrow that is pushed from under the bed and out his throat. Marcie is stalked until she is chunked in the face with an axe. Alice, Brenda and Bill are playing strip-Monopoly. Brenda thinks she left the windows open in her cabin and leaves. She is lured out into the archery range by the cries of a child. The power goes out. Bill goes to investigate and disappears. Steve comes back from being in town and runs into someone whom he knows, and is stabbed. Alice is now alone and treks around camp trying to find her friends, but only finds their corpses. As she hightails it out of camp she spots someone walking down the road, it is a middle-aged woman who introduces herself as Mrs. Voorhees. But Alice soon realizes that her savior is actually the killer. You see, Mrs. Voorhees is the mother of the young boy who drowned in 1957 (whose name is, natch, Jason) and has slaughtered everyone from keeping the camp from reopening. Alice and Mrs. Voorhees battle it out on the lakeshore until Alice finally beheads her attacker with a machete. Instead of going to town to contact the authorities though, she takes a canoe and rows it to the middle of the lake. The next day, she is awakened in the canoe by the cops yelling to her from the shore, just then the decomposed body of Jason leaps out of the water and drags poor Alice under. She survives, and tells the cops solemnly "He's still there."

It's hard to really review films like this, because they are simply a litany of death episodes, one right after the other. What's good about "Friday the 13th"? Well, the acting, although unpolished, is adequate, and the actors are pretty likable (and yes, that IS Kevin Bacon as Jack). There is darkness and mood to spare and the movie goes along at an unhurried pace attempting, but not always succeeding, in generating suspense. And it does create a decent "whodunnit?". What's bad? You can basically blame this movie for introducing us to the rules of stupidity these movies are known for: saying "I'll be right back", splitting up to look for other characters, wandering in the dark knowing something's out there etc. But no matter.

The original "Friday the 13th" is a decent enough thrill-ride, nothing more. However, the immense box-office success of this movie spawned sequels, all of varying degrees of lame.  But I'll get to those later.