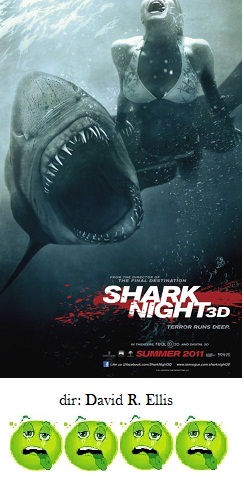 Those expecting a cheeky and delightfully absurb creature feature along the lines of the 2010 Piranha remake will be thoroughly disappointed by the limp and lethargic Shark Night.  Actually, just about anyone would be disappointed by it.

The story follows a group of thoroughly annoying college students who are spending spring break on the bayous of Louisiana.  One of the students, our heroine Sara Paxton, has a vacation home on a secluded island, and we just count the minutes down until one of these nimrods becomes shark bait.  The only other characters of note are a couple of rednecks and a local sheriff, so no prizes in guessing who's responsible for the recent shark infestation.

Now, how do the sharks wind up in the bayous and why?  Well, let's just say that the answer to 'how' is frustratingly murky.  There isn't a convincing explanation at all as to how the rednecks and sheriff were able to find, capture, care for, and transport the wide variety of shark species that seem to have taken to this new environment like...well, like a fish to water.  There they are and that's all that matters, I suppose.

As to 'why', get ready for one of the most ludicrous and insanely impractical motives in recent movie history.  You see, these guys have implanted tiny cameras onto the sharks so that they can film them eating people, and then they will take these videos and post them online, and presumably make a bazillion dollars.  Yeah.  Not too many flaws in that plan, geniuses.

All of that would be pretty irrelevent if we got an exciting film to be entertained by, but we don't.  Yes, several of the students get snacked upon, but there is no suspense or scares, the CGI sharks look it, there is very little violence to better skate by with a PG-13 rating, and the pacing is agonizingly slow.  There is one very nifty attack shot when a shark leaps out of the water to chow down on a jet skier, but watching the rest of the movie to get to this moment is hardly worth it.

Shark Night is the epitome of bland.  No one involved seemed to even really try to make a good movie here.  If they really did care, the first thing they needed to do was fire the screenwriter and completely start from scratch, and even then the chances for a quality film would've been iffy at best.