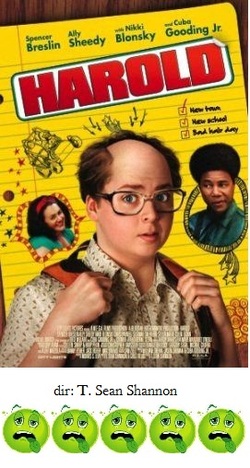 This bizarre and uncomfortable attempt at comedy is so far removed from  any definition of humor that, if I didn't know any better, I'd swear it was made by aliens from another planet.  In a word, Harold is a miscalculation.

Harold Reynolds, played by Spencer Breslin, is a strange 13 year-old boy who suffers from a severe case of premature balding.  As the film begins, he, his older sister Stella Maeve and single mom Ally Sheedy move to a new city and Harold must begin at a new school and suffer through being lumped in with the nerds by all of the cool kids.  Basically, Harold is about his rise from the depths of middle school geekdom by winning a go-kart race.

The biggest problem with Harold (and it's a BIG problem) is the way the character of Harold is written and acted.  It would be one thing if this were an earnest attempt to create a film about what it really would be like to be 13 and bald, but Harold is so unlike any 13 year-old that has ever lived (or will ever live).  Instead of being written as a middle schooler who must deal with a middle-aged problem, he's written like a retiree who is trying to pass himself off as a teenager.  This approach derails every attempt at humor and makes it all come off as kind of creepy.

I guess writer/director T. Sean Shannon thought it was funny by making Harold wear frumpy clothes, have him have inordinate amounts of back hair, bunions as well as a bad back.  He also loves to watch "Murder, She Wrote" and "Matlock"....like any current 13 year-old does.  He's such an old man that when he tries to romance the pretty girl in his class, he comes off like a child molester.  Despite the bald head, no one in the world would believe Harold to actually be an adult, but everyone in the movie is so stupid they can't figure this out.  Hence we get unfunny scenes involving Harold seeing the doctor for a physical for school enrollment and being put through a prostate exam, or a scene where he's arrested for contributing to the delinquency of minors and thrown in jail with hardened, violent criminals.

Also poorly written are Ally Sheedy's character, who instantly qualifiies as one of the worst mothers in screen history (even she forgets Harold is a teenager and, for his birthday, gets him a Rascal instead of a go-kart), and the school janitor that befriends Harold, played by Cuba Gooding, Jr. in further career free-fall (and you thought it couldn't get worse than Daddy Day Camp; take back this guy's Oscar already).  A running joke throughtout the movie has just about every character assuming Gooding, Jr. is a pedophile.

Maybe, all things considered, the concept behind Harold was so flawed that nothing could've been done to make it work.  It's such an unpleasant curiousity that it makes Clifford, the dismal Martin Short-as-10-year-old-boy comedy, look better and better.

How slapdash a movie is Harold?  Ask yourself why Harold's family's last name in the movie is Reynolds, but the end credits show their last name as Clemens.  Lazy.