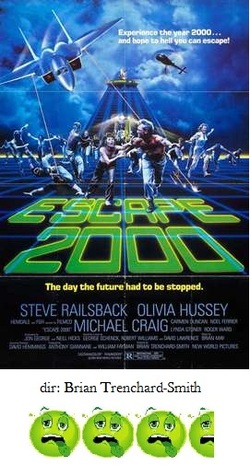 It's amazing the kinds of false advertising movie studios can get away with in their promotional materials.  By looking at the poster, you'd be perfectly justified into thinking Escape 2000 was some sort of big, action, sci-fi epic, what with the futuristic motif of laser-equipped jets and such.  But, no.  It's actually a low-budget, dingy, Australian exploitation flick that is essentially just a retelling of The Most Dangerous Game.

Filmed, and originally released as Turkey Shoot, Escape 2000 tells of a post-apocalyptic future (is there any other kind?) where citizens suspected of treason and revolutionary thoughts are rounded up and shipped off to godforsaken prison camps in the jungle.  These prisoners, labeled 'deviants', are subjected to forced labor and torture, and if they die? No one will care.

Our protagonists are dependably bad Steve Railsback and a slumming Olivia Hussey.  These two, along with a couple of other minor deviants, are selected by the sadistic prison warden and his cronies to participate in a game.  The game, of course, has them being sent off into the wilds to be hunted down, and if they remain alive for 24 hours, they'll be granted their freedom.

The villains include the warden, who wants Railsback as a target, an old geez to track Hussey, a man who rides in a strange jeep with a man-beast, and a woman with lesbian tendencies (of course) who fires explosive arrows while riding on horseback.  Once the race begins, the movie picks up the pace quite a bit from its very overlong first act which mainly consists of the brutal beatings or terrorization of the deviants.  At one point, Railsback is strapped to a rack-like torture device which is about the only time he changes his facial expression.  The acting by the entire cast is of two styles, flat or histrionic, and there is no area in between, which leaves many scenes with an odd, cock-eyed humorous tone which I highly doubt was intentional.

Escape 2000 (or Turkey Shoot or any of the other titles it's been released under throughout the world) is wall-to-wall with boobs, bullets and blood, as any good exploitation film is, so in its own way, it works for what it's trying to accomplish.  Unfortunately, the story is one we've seen countless times before, and will no doubt, see countless times in the future.