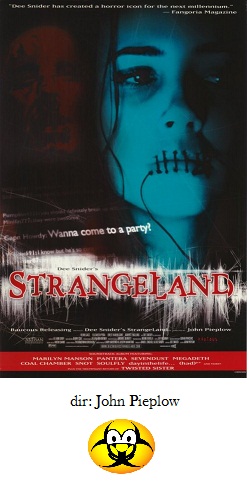 Strangeland is just an excuse for Snider to engage in his fetishistic obsession with piercing.  He stars as the horrific monster who trolls for victims on online teen chatrooms using the screen name 'Capt. Howdy'.  It's quite a shame no one in the movie realizes this is the name of the 'spirit' young Regan McNeil talks to through a Ouija board in The Exorcist.  Knowing this would've saved them a lot of grief.

Anyway, the first half of the movie revolves around the teen daughter of police officer Kevin Gage who is abducted by Snider and locked away in his torture dungeon along with several others.  The teen victims all get their lips sewn together, and are tortured with various piercing implements.  One boy is given a long speech by Snider about the best kind of penile piercing before being subjected to it, all the while the cop's daughter is watching from a cage and pisses through a forcibly inserted catheter.  Fun.  Eventually, Gage tracks down Snider, arrests him and rescues his daughter and the other disfigured teens.

All of this nauseating misery occurs in the first half of Strangeland, and then the movie takes an even more repugnant twist.  Snider is ruled legally insane, is rehabilitated and is then released four years later.  Now that he's 'sane' he dresses in nerdy sweaters and flood pants and is persecuted by the vigilante-minded redneck citizens.  Poor Dee.  Then they lynch him, but somehow he comes back to life (How?  No idea.) and goes back to his piercing ways and tortures the men and women who killed him.  Gage finds him again but now kills him for good.  The end.

At least in the first half of Strangeland we know where we stand:  Snider = bad, tortured kids = victims.  But how are supposed to feel in the second half?  Is Snider now good and the rednecks are now bad?  Do we cheer when a post-lynched Snider begins slicing them up?  All I know is the whole damn thing was depressing and vile.  Also, the many (many, many) paragraphs of purple pro-piercing prose, intoned by Snider, which tries to equate it all with some sort of strength of spirit evokes both groans and serious eye-rolling.

Strangeland is just garbage of the first order.  It has no reason to exist other that to show as much pain and degradation as possible.  Twisted Sister was never that much of a metal group to begin with, but if screenwriting and acting is what Snider planned to do for career move, I would wholly support a reunion tour.